"Outback Bowl, that's about it."

Share All sharing options for: "Outback Bowl, that's about it."

In yet another story about Steve Spurrier, ESPN's Gene Wojciechowski talks about the hoopla that will surround this year's SEC Football Media Day.

A couple of paragraphs near the end help redeem the article:

He gave me a tour of the new football facility attached to one end of the concrete stadium. He showed me the football-only weight room, the sprint track, the state-of-the-art film rooms. But there was an awkward silence when he stopped at the sparse trophy case, which featured hardware from a 2001 Outback Bowl victory.

"Outback Bowl, that's about it," said Spurrier, who won a national championship, seven SEC titles, and 122 games during his 12-year stay at Florida. "Yep, Outback Bowl."

Do you think the Old Ball Coach looks at that trophy case and has second thoughts? 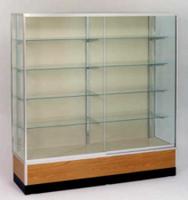