Sometimes you just gotta bust out the whoopin' stick. Four times, if necessary.

The White Sox ended their seven game skid right as I was about to go from the "this sucks" to the "we're doomed" stage. But the Sox are about to start a ten game road trip, so check back next week.

The Indians are going to win again today. This isn't cute anymore, Cleveland.

Woody Paige* is one of the first blowhards to insinuate that the White Sox aren't going to win the AL Central, and frankly I'm surprised that this hasn't come up a little more over the last few days.

Look, It's Offense!
Over the weekend, NC State's first string offense looked good against the first string defense. Jay Davis finished the day 11-14 for 184 yards and a TD pass. Chuck Amato was prompted to refer to the defense as "Dairy Queen" because of the unit's soft (his term) performance.

Several of the running backs had a good scrimmage, which doesn't do much to clear the picture in the backfield. But that's definitely a good thing. Here's an article on NC State's glut at running back. Makes one feel good about State's chances to effectively replace that guy who carried the ball last year. You know, what's-his-name...

On a less trivial note, a jury sentenced Timothy Johnson--who killed two men at an NC State tailgate last season--to life in prison (he was eligible for the death penalty). A sad end to one part of this terrible saga, but the ordeal is not over--Timothy's brother could end up in court later this fall.

Putting Maple to Good Use
The NC State athletics department is in the process of installing a wood floor as part of renovations to Reynolds Coliseum. The wood will cover the entire surface area of the floor of the arena, not just the basketball court portion. The toll on the maple community was thusly high:

The new flooring - made from more than 2,000 Northern hard maple trees grown in upper Michigan, Wisconsin and Canada - was installed by Royalwood Associates, Inc., of Raleigh, which specializes in installing gymnasium floors for K-12 schools in the Carolinas, Virginia, Maryland and Georgia.

The north side, for volleyball and wrestling matches. This portion of the gym will be surrounded on three sides by upper deck seating, creating a more intimate and louder environment for those sports. "The closeness of the fans should be advantageous for volleyball," said Wolfpack coach Mary Byrne.


Y'know what else would be advantageous for volleyball? Moving to the MEAC. 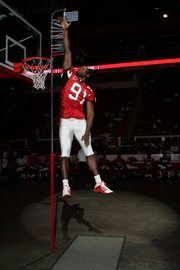 
[* -- I flipped to ESPN News and Around the Horn was re-running. I wasn't watching the show on purpose. Really. My remote's batteries died.]