Eastern Kentucky lost a squeaker to Western Kentucky last week. Quarterback Josh Greco had another good game, suggesting that maybe he isn't as teh suck as he appeared based on his 2004 stats. Bummer.

The Wolfpack spent most of this week protesting, though it didn't have anything to do with national politics. On Tuesday, Chuck Amato insisted that the team isn't undisciplined (rough estimate of smirks among press members: 7-10.). Today, we learn that NC State could totally throw deep if it wanted to:

Marc Trestman, N.C. State's new offensive coordinator, says the Wolfpack will use it.

Quarterback Jay Davis has the arm to throw it, he said. The offensive line can protect well enough to let him throw it. The Pack has the receivers to go get it.

The deep pass. The bomb.

"We will take some shots," Trestman said this week. "I don't have a problem calling deep throws with [Davis]. We've got guys who can run."


For the record, I don't care if we've got a deep passing game or not. The offense looked much better against VPI, and that's the important thing (I coulda used a few five more TDs, but meh). I have no problems with nickel and diming it down the field; that's a big improvement over the penny-pinching we did last year.

Meanwhile, in other places...
-- Good news out of Winston-Salem: "Punting is a bright spot for Deacons." Clearly a sign of better days ahead.
-- In Chapel Hill, the Tarheels are just hoping to avoid a bludgeoning at the hands of Wisconsin. "Bludgeon" is such an awesomely connotative word. 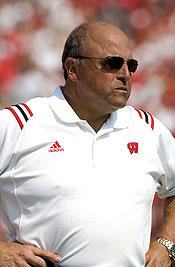 "I ought to club them and eat their bones!"

At the end of the article:

"They play [man-to-man] a lot," UNC wide receiver Derrele Mitchell said. "... [With] our size and speed, I think we can go over the top of them. They play some zone, so we can just hit the holes and catch some balls."


Yeah, Derrele, piece of cake. You and the boys are going to have a leisurely game of catch.


More From Backing The Pack