Share All sharing options for: Here come the Colonels 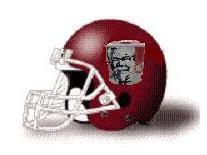 With the Hokies behind us, it's time to look forward to the first win of the season (even if it is--sigh--nine days away): Eastern Kentucky.

The Colonels lost their first game of the season to Appalachain State, 24-16. Some Wolfpack fans are giving EKU undue credit for staying close to App...I'm not sure where the respect for ASU comes from. Maybe those beatings they used to give Wake Forest.

In case anyone actually is concerned, here are some numbers:

They look like a middle-of-the-road D-IAA team to me, and if their offense is as bad as it was last year, they aren't going to break 10 points.

Running back CJ Hudson ran for over 1200 yards in 2004, but he has graduated. Their best skill position player this year might be receiver Andre Ralston, who had over 600 yards receiving in 2004 and had 9 catches for 152 yards against ASU.

EKU's offensive line is actually pretty big--in fact, the Colonels start more 300+ pounders than NC State does. Their defensive line is another story; neither starting DT weighs more than 275 lbs. NCSU's OL outweighs the four starters on the Eastern Kentucky DL by anywhere from 20-50 lbs. I imagine we will definitely try to assert ourselves on the ground. And compared to Virginia Tech's defensive line, the Colonels' DL will look like it's moving in slow motion.