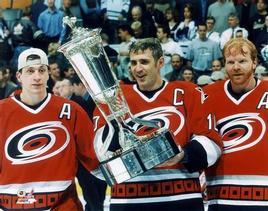 The run to the Stanley Cup Finals in 2002 will always be one of the best couple of months I've had as a fan of any team.

When the Hartford Whalers announced they were relocating to...Raleigh, North Carolina, I'm sure most people said, "What the hell for?"

Me? I was too excited to care.

Fortunately, Ron Francis didn't care either. He came back to the franchise in 1998, and the Hurricanes made the playoffs the very next season. Francis helped the 'Canes reach the playoffs three times. They won the Southeast division twice.