What an odd afternoon.

NC State had 9 possessions in the first half. Here's how they ended:

Marcus Stone finished the first half 1-7 with 2 INTs. I don't think I've seen an uglier half of football from the offense, yet despite all the gaffes, we were only down by a touchdown at halftime. We were all like, "Merry Christmas," and they were all like, "Thanks...I guess."

Hmph. You won't be getting so much as a card next year, Southern Mississippi!

The defense played well and kept USM bottled up most of the game. Turnovers put the defense into several difficult situations, and they came through for us in most of them. Southern Mississippi's only first half score came after Toney Baker's fumble, which occurred at the NCSU 22-yard-line.

What became a bigger story than the defense, was, of course...

Super Top Secret Weapon Andre Brown averaged nearly 8 yards-per-carry on his way to 248 yards. The Wolfpack racked up 297 rushing yards as a team, compared to 128 yards through the air. Nice to see us have a big game on the ground for a change.

I thought the offensive line did a pretty good job opening up holes for Brown, though some of his runs were un-assisted. On his 61 yarder, for example, he broke a tackle that would have limited the run to 5-6 yards. That wasn't the only instance of poor tackling by USM defenders.

The quarterback situation is obviously still a serious problem, but at least Stone looked more comfortable in the second half. He tossed the go-ahead TD pass and didn't throw any more interceptions. The biggest thing Marcus needs to take from Jay Davis is efficiency: between last week and this one, Stone is 16-42 (38.1%). We could at least count on Jay to complete a decent percentage of his pass attempts.

I still can't believe NC State won this game. When USM went up by 10 points early in the 4th quarter, I figured that was going to be too much for the offense. But Andre Brown scored less than a minute later, the defense held USM, and Marcus Stone led a clutch 15 play drive.

Oh, and re: attendance? The box score lists 52,500 for today, which is 5,000 under capacity. Here's a shot I took during the first half (after allowing some time for late arrivers): 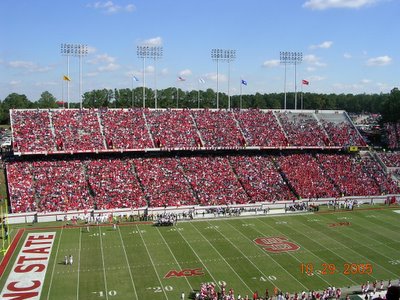