At least the first ten minutes were fun

Share All sharing options for: At least the first ten minutes were fun

I am posting the box score, but I can think of few reasons why anyone would want to look at it.

Here's a half-hearted attempt at being constructive:

-- We knew we needed to get 1 of 2 out of FSU and BC in order to give ourselves a shot at a bowl trip. We've done that.

-- Over the last two games, we've committed one turnover. So that's something.

Marcus Stone got off to an encouraging start, looking comfortable and making good throws. The athleticism he showed on the long pass play to Brian Clark was 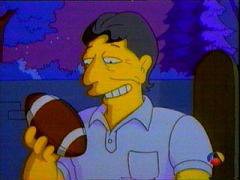 "Remember, there's nothing funny
about ... vapor lock."
impressive, as was the would-be touchdown pass that TJ Williams dropped. Crappy Marcus Stone appeared shortly thereafter and incompleted his way to halftime.

Perhaps Marcus will put everything together one day, rather than simply giving us a few flashes of ability.

Since the full, detailed box score is currently unavailable, I don't have a tally of the number of times we ran the ball on first down tonight. Our conservative bent has made for a lot of first down runs over the last two weeks. We threw the ball a bit more tonight, mostly because the score forced our hand.

BC keyed on the run every bit as much as USM and FSU did; the difference in previous weeks was our ability to execute despite the they-know-it's-comin' factor. The offensive line was awful in all respects: they allowed eight sacks, and NCSU averaged less than two yards-per-carry.

I was really disappointed at the number of big plays allowed by the Wolfpack defense. Will Blackmon burned AJ Davis for two long pass plays in the first half, both of which led to Boston College scores. The first, which came on a third-and-a-mile play, ended up being an omen of things to come. Boston College's massive OL kept NC State from getting consistent pressure on Matt Ryan, and it also opened up a lot of holes for LV Whitworth.

Special teams were a mixed bag. Deraney hit a 48-yard field goal, but missed a long one later. He didn't get much distance on his punts, not to mention he was nearly killed on one occasion by a horde of BC players. That particular punt--near the end of the first half--looked to be another major blocking breakdown. Why has this become an issue all of the sudden? Thank goodness Deraney's injury wasn't serious enough to keep him out of the game.

With this egg laid and buried, NC State is in a position I'd hoped to aviod: it'll have to beat Maryland in order to become bowl eligible. I hate the thought of having so much riding on a game against the Terps. I'd almost feel better if the game were on the road.

Hopefully, we'll look crisper against Middle Tennessee State and inspire some confidence heading into the UMD showdown. If Marcus Stone can't complete at least 50% of his throws against MTSU, there is no hope for him...