Share All sharing options for: Flutie Flakes: Part of a balanced breakfast

It never ceases to amaze me how mindsets can change so quickly. Coming off of two consecutive wins, I think there are a lot of people who not only believe that we can beat Boston College, but that we should beat Boston College. Count me among them (might as well roll with the good vibes while they're here...).

Earlier today, the Eagles announced that Matt Ryan would be starting at quarterback in place of Quinton Porter. Judging by Eagle In Atlanta's reaction, BC fans have been waiting for this move.

In the spots in which Ryan has played, he's played well. He was 10-14 against UNC on Saturday and played a significant role in BC's comeback win against Wake Forest three weeks ago. Ryan has completed over 65% of his passes this year.

Porter's troubles seem to have started after a good performance against Virginia. Following the UVA win, he threw for under 200 yards in each of his next three starts (including the Carolina game).


The Eagles have the third-best offense in the ACC despite ranking just 50th nationally. It has been another rough year for ACC offenses...

Statistically, their running game appears worse than their passing game; at a glance, though, the Eagles' situation looks similar to Florida State's. That is, their proficiency on the ground is masked by a lack of carries. Among ACC schools, only FSU and NC State are averaging fewer rushes-per-game (obviously, NC State is working to change that). Because Boston College has been playing from behind a lot over the last three weeks, they've had to shift away from running the ball. They will play a more balanced style against the Wolfpack if they can. 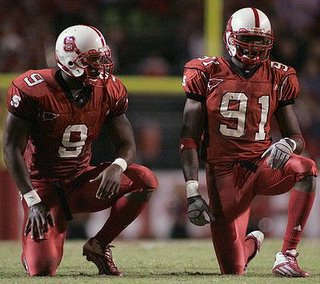 So, much like Florida State, the Eagles have a couple of running backs who are good when they get the ball. Like Florida State, they aren't shy about throwing the ball (there's no reason for Porter's benching to change that)--they haven't attempted fewer than 30 throws in a game since September 10th against Army.

BC's tendencies being what they are, NC State's defensive gameplan shouldn't change very much this week. That gameplan isn't complicated; it pretty much begins and ends with asking the defensive line to beat the crap out of another opponent.

If NC State can get out to a lead and sustain it, Williams and Lawson can worry less about the run and concentrate on creating a big pass rush.