Share All sharing options for: More MTSU notes; the return of McCants

-- From the Tennessean, more on the Lee Fowler-Andy McCollum relationship (while the AD at Middle Tennessee, Fowler hired McCollum):

When the Blue Raiders made the difficult step up from Division I-AA to I-A football in 1999, Fowler said he had to make Andy McCollum something of a sacrificial lamb. He had to force McCollum to play games his team had nearly no chance of winning.

"It was like sending him into a gunfight with a stick,'' Fowler said. "Because you don't have the players, you don't have the ability to get people to come to your place to play, and you're sent out on road games that you're more than likely not going to win."

-- I'm just wondering: if the Big 4 were conglomerated into the "Duke Forest Tarpack", what would the uniforms look like? I assume that East Carolina's players would comprise the practice squad.

-- In this article about the local women's basketball programs:

Carolina has added a slew of freshmen, most notably guard Rashanda McCants, the younger sister of former UNC men's star Rashad McCants. Rashanda's game is reminiscent of her brother's, but UNC might use her to spell Ivory Latta at the point.


Had the recently departed McCants been a marginal player not worthy of the NBA, I'd have found this news to be rather "convenient." 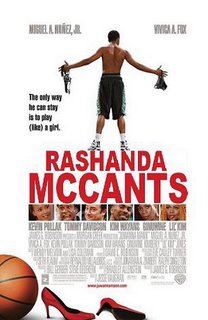