MTSU: the best team in the greater Nashville area

Share All sharing options for: MTSU: the best team in the greater Nashville area

The Blue Raiders are coming off a deflating loss to Louisiana-Monroe which ended their Sun Belt conference title hopes. But they do still have that win over Vandy.

Middle Tennessee State 2005Yards/GameNat'l RankRush Offense114.896Pass Offense186.691Total Offense301.4107Rush Defense142.657Pass Defense193.428Total Defense33633
As you can see, there isn't much that the Blue Raiders do well. They also rank 87th in penalties/game (behind the Wolfpack, even). In a game against Florida Atlantic earlier this season, MTSU committed 11 penalties for 158 yards, which is nearly 15 yards per penalty. At least they aren't half-assin' it.

Although their passing game doesn't look like much on paper, it is worth noting that QB Clint Marks has been an efficient passer. He's completed 66% of his passes this season (130-197) and has 6 INTs to go with 6 TD passes. Marks relies on Cleannord Saintil, who has 44 catches and 589 yards this season. From this point forward, Saintil will be known only as "Draconian Lentils," because that's the coolest phrase I found when I anagrammed his name (how could you not anagram his name?). I also liked "Nonsectarian Dill." 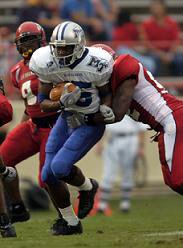 Eugene Gross gets most of the carries out of the backfield and is also, along with Draconian Lentils, among Clint Mark's favorite targets.

In its two games against major conference foes (Bama and Vandy), MTSU has averaged less than 200 total yards. Alabama held the Blue Raiders to 34 yards rushing, while Vandy held them to 62 yards. If they break 100 on the ground against NC State, it's a bad day for the Wolfpack defense.

With the running game contained, it'll be all about stopping MTSU's efficient short passing game. We probably shouldn't expect Clint Marks to have one of those 12-29 games, as he's been able to maintain a high completion percentage against all of MTSU's opponents--including Alabama. The Wolfpack's defensive line should hopefully have something to say about that.

I'll be disappointed if NC State doesn't force 2-3 turnovers even though MTSU is good at hangin' onto the ball (just 11 turnovers).

Middle Tennessee's defensive numbers are decent but mostly a reflection of the company it keeps. The Raiders held Alabama to 345 total yards, though that doesn't say a whole lot. Over the last three weeks, they've allowed 183 rushing yards per game and better than 4.5 yards per carry.

Placekicker Colby Smith hasn't made a field goal outside of 40 yards (0-5). Not that the game will come down to a kick... He handles the punting duties as well.

As for our side of things: not much needs to be said.

Andre Brown is set up for a rebound, while Marcus Stone has no excuse for another slow start. It would be nice to see some continuity out of the offense--some evidence that we can put drives together and score consistently without relying on big plays.

Edit: Visiting MTSU fans, please feel free to share some insight into the Blue Raiders. It's hard to know what to expect based off of recaps and box scores.