Share All sharing options for: Thoughts on Wake's basketball season-opener and some last-minute football notes

Hoops!
Wake Forest beat Mississippi Valley State 78-64 last night, though the game was close for a good portion. That's not something worth worrying about yet, though. This being the first game that counts, I was interested in seeing how Wake distributed its playing time. Not surprisingly, Justin Gray logged the most minutes--he's the only known quantity in the Deacs' thin backcourt. Plus he's not a big, hulking, foul-magnet. Other notes:

-- I was surprised to see that Justin Gray didn't attempt a 3-pointer. He must really be taking this point guard thing seriously.

-- Very impressive line from Trent Strickland. He scored efficiently and grabbed a bunch of rebounds--over 20% of the available boards while he was in the game (that's really good). Strickland's rebounding numbers were nothing special last season ('04-'05 rebounding percentage = 11.5%), though.

-- Strickland, as well as Chris Ellis and Kyle Visser, will be playing a lot more minutes this year. Obviously, how they adjust to this will be a huge factor in Wake's season. Of the three, Strickland got the most minutes last season, averaging about 17 per game.

-- Looking at the discrepancy in shooting percentages between the two teams, it's hard to imagine how the game was close. Turnovers probably had a lot to do with it: Wake turned the ball over on 28% of its possessions; MVSU turned it over just 13% of the time.

-- As you have probably heard by now JJ Jones won't be traveling with the team to Chestnut Hill. This hurts from a depth/experience standpoint, but I have always thought Jones was a marginal player. It's disappointing to hear that a fifth-year senior is having academic issues.

-- If you haven't seen it, Eagle in Atlanta has posted a preview of the NCSU/BC game.

-- We are 2-0 over the last two weeks because I have a newly-discovered lucky shirt. You see, after the White Sox lost game one of the ALCS to Anaheim, I decided that I'd make a switch from my normal ChiSox gameday attire and wear this: 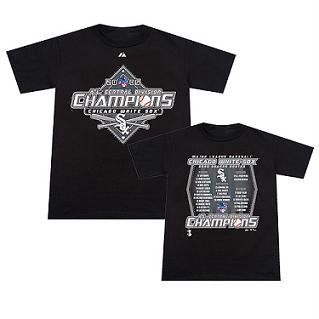 That's the quickly-rendered-superfluous AL Central Division Champs t-shirt that I bought because I didn't think the White Sox would actually advance in the postseason.

Anyway. So I wore it for game two, which Chicago won, and then I pledged to wear the shirt until they lost again. They proceeded to win seven straight games en route to the title. As I was getting ready for the USM game, which was a few days after the World Series-clincher, I thought we'd need all the luck we could muster. I put the Sox t-shirt on underneath all my red--since it would have been in terribly bad form to attend the game in something other than red--and wouldn't you know it: fourth quarter comeback win. The shirt also had enough mojo to overcome two blocked punts and preserve the win in Tallahassee.

Yeah, it's a little smelly; and I don't really know what that crusty spot on the front is. But I'll be wearing it again tomorrow, and as long as things keep going the way they're going, the washer can wait.