Share All sharing options for: More on Trevor Ferguson

Ferguson didn't enroll in Pittsburgh because he said he was homesick. It's not surprising, then, that the Florida-native's decision to attend NC State has some Pittsburgh fans scratching their heads.

In the Charlotte Observer blurb, which I linked yesterday and which also appears in the above link, Ferguson's coach says that Ferguson didn't realize that he was a poor fit for Pittsburgh's "rugged, half-court" offense. My initial reaction was, aren't Pittsburgh and NC State somewhat similar? In fact, if you employ Ken Pomeroy's Basketball Shrink (patent pending!) on NC State, Pittsburgh is one of the Wolfpack's closest comparables. But this is a comparison of output, not style. If you make the comparison based on point distribution (i.e., how a team scores its points), it becomes apparent that the teams are not closely-related (you'll have to scroll for a while to find Pitt). Pittsburgh isn't perimeter-oriented (and thus is "rugged"?); NC State is. Similar tempos, different methods. 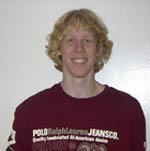 "I am a new
tie wearing."*
Or maybe Pittsburgh's players like to herd cattle, scale large mountains, wear Wranglers and smoke Marlboros. Y'know, the kinds of things that make you rugged.

To me, the strangest aspect of the Ferguson story is the fact that he didn't visit Pittsburgh before committing. Regardless of how much one likes a particular coach, it is usually good practice to ask such questions as Will I like attending this school and enjoy its surrounding area? and Does the team's philosophy match up with my skills? Visits can be enlightening in those ways and others. For instance, Ferguson might have learned that when Pitt's coaches said the school was in Pennsylvania, they weren't kidding.

Items regarding Ferguson from the Pitt Sports Blather archive:

Joking aside, welcome to Raleigh, Trevor.