We're on the board in conference play.

Miami is not a particularly good defensive team, despite its big reboundy guys. One of the culprits is perimeter defense. In 2005, Hurricanes opponents scored 35% of their points from behind the arc. Only nine teams allowed opponents to score a higher proportion of their points via the three-pointer.

In last year's meeting, NC State took full advantage of that perimeter defense, hitting 12-24 threes (it is still amazing to me that we lost despite hitting so many threes at such a high percentage).

I expect more of the same this Sunday, and I also expect the Wolfpack to rebound better at the defensive end. 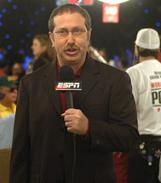 "Y'know, Lon, poor
perimeter defense killed
my third marriage."
We definitely saw the Pack take advantage of Miami's suspect perimeter defense again, and the rebounding--while not great--was an improvement over last year's game against the Hurricanes.

Last season the Canes managed to grab 48.6% of available offensive boards; tonight, they "only" grabbed 38.6%.

Tonight's game provides a great example with regards to rebounding numbers. Both teams had 33 rebounds, but if you compare Miami's offensive and defensive rebound rates (38.6% and 72.7%) to NC State's rates (27.3% and 61.4%), you can see that Miami in fact had a marked rebounding advantage.

-- Ced Simmons: 8 points, 9 rebounds, 7 blocks. It is way too much fun watching him swat the hell out of opponents' shots. Simmons is now averaging 4.7 blocks/40 minutes. He was less impressive at the offensive end; from watching the game I thought that he had 4-5 turnovers, but the box says he only had two.

-- Cam! Tony! Is this what a healthy Tony Bethel looks like? He has been shooting really well over the last couple of games, and for that matter, so has Cam. These guys are especially important on nights (like tonight) when Atsur and Evtimov have trouble scoring. Evtimov didn't really get involved until the last 7-8 minutes, while Atsur only managed three field goal attempts.

-- I am no longer skeptical about Anthony King's role in the UM offense. He was a big factor for them tonight, and it looked like he was a significant part of Miami's gameplan.

-- Anthony Harris and Denis Clemente combined to shoot 5-20 from the field. Bless them.

-- The game featured 65 possessions. NC State's OFF EFF (81/65 x 100) = 125. Miami's OFF EFF = 106. So Miami actually played better at the offensive end than I had thought. The Hurricanes were aided by good offensive rebounding, good free throw shooting, and a low turnover rate.

-- Gavin Grant's versatility is extremely valuable, so I hope that he'll get better at taking care of the ball as the season progresses. The team will improve a lot when he stops acting as a drain on the offense. We need him on the court.