Forgive me if my recollection proves to be a little fuzzy, because I went into cardiac arrest at some point in the first overtime.

I feel kind of bad for Clemson, but it is nice to play a team that's so terrible at the free throw line. Shawan Robinson hit 10-10, while the other guys were 11-27 (.407). They could have iced the game in regulation or made life a whole lot more difficult for the Pack at the end of the first overtime.

I'm still shocked we were able to execute in the final frantic seconds of regulation and the first OT. Usually, it seems, those situations end horribly. Although it almost did end horribly in regulation after Atsur was called for travelling with about :15 left and the Wolfpack down two.

Down one late in OT1, Evtimov scared the religion into everyone by throwing a lob to Cedric Simmons. Simmons had a mismatch and it was good recognition on Evtimov's part, but a lot can go wrong on a lob like that. Fortunately, Ced caught the ball cleanly and the Clemson defender had no choice but to foul him.

The Tigers failed another free throw shooting test in the second overtime. Cliff Hammonds stepped to the line with his team down four and 2:45 on the clock and missed both FTAs. On NC State's ensuing possession, Cameron Bennerman knocked down a huge three to extend State's lead to seven.

Save the turnover category, NC State's offense performed well. The Wolfpack bounced back from the craptaculence displayed against SHU to shoot 62.3% from the floor and out-rebound the Tigers. Clemson only rebounded 25% of its available offensive boards, which is well below their season average.

Clemson came in with a +5.6% advantage in the turnover rate category, and they were strong in this area again today(and it probably should have won them the game). Their quick hands are no joke.

I thought the Pack's defense was just okay. State held Clemson to an OFF EFF of 103, which is the second-lowest mark posted by an NC State opponent in conference play (and much lower than what we've been seeing lately...)--but that OFF EFF was made to look worse by Clemson's poor OT shooting. While, as mentioned, the rebounding aspect of NC State's defense was good, NCSU didn't force turnovers (again) and gave the Tigers too many free throw attempts. Clemson shot 53.7% (eFG%) in regulation and 30% in the overtimes.

I'm not sure what Cameron Bennerman said to Mike Wood in Chapel Hill, but it has apparently resulted in some dangerous consequences. This afternoon, Section Six sources obtained the following document from Wood's locker in Littlejohn Coliseum. 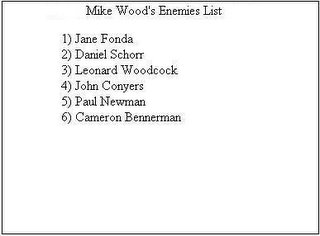