In Some States, It's A Delicacy

Share All sharing options for: In Some States, It's A Delicacy

-- Some quotables from UNC/NCSU players and coaches:

"I teased him last year about him eating squirrel. He's eaten squirrel before. That's the only guy I know that's ever eaten squirrel." -- N.C. State guard Tony Bethel on teammate Cedric Simmons 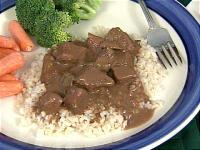 Those only look
like beef tips.
I started laughing at the WTF Factor of this comment from Tony, but then it struck me that I'd eaten more than a few items of questionable origin at a certain campus dining hall.

And I have in the past wondered if Fountain served squirrel as one of its meats-du-jour. If we discovered that they'd been sneaking squirrel onto the menu, would anyone really be surprised?

But the Pack are even more communal without Hodge. The top seven players are all major contributors, with the bigs -- Cedric Simmons, Andrew Brackman and Gavin Grant -- all in tune with the guys on the perimeter (Ilian Evtimov, Engin Atsur, Cameron Bennerman and Tony Bethel).

Simmons, Brackman and Grant are in their second season understanding Sendek's system. Bethel finally is feeling better after battling health issues all of last season. Atsur is coming off another international summer playing ball, and Evtimov is yet another year removed from missing the season with an ACL injury.

-- By the way, I don't know if anyone has noticed that NC State sits at #5 in Ken Pomeroy's ratings. His ratings system, which is used for predictive purposes, suggests that the Pack has a 69% chance of beating the Tar Heels. I'll take those odds.

Because of poor schedule strength, the Wolfpack find themselves at #39 in the RPI, but that is not a bad place to be sitting as they head into conference play. Certainly beats last year.

-- Yesterday, the Wilmington Star's Andrew Jones offered his evaluation of the Wolfpack. Nothing you haven't seen before. Includes this entry into the great 3 pt.-FGA debate (the following is one of the team's weaknesses, of course):

Reliance On Threes – State still attempts too many 3-pointers. Even though Simmons isn’t all that polished yet, he should get more touches than he does (he has gotten more touches the last couple of games, and this must continue). Running the ball through the post more will increase State’s open looks away from the basket, and since Simmons and Brackman are solid passers, they can find cutter, especially along the baseline, notably Bennerman and Gavin Grant. More balance in shot selection will make the Wolfpack a more legitimate threat to reach the Final Four.


As long as we have one of the best effective field goal percentages in the country (and, in turn, an efficient offense), I don't think anyone should be complaining.

So how did Sendek make N.C. State a place where the nation's top high school players wanted to be again? He completely changed his recruiting philosophy, evaluating and offering scholarships to kids at earlier ages.

Call it the fast forward approach. Sendek and his assistants, who focused on prospects outside the top 100 in the past, are starting to spend a lot of time scouting freshmen and sophomores, bringing 14- and 15-year-olds to their camps and making it clear they want them before some other schools have even contacted them.

N.C. State was the first school to show interest and offer Wright. They lured him to their summer camp last year along with another highly touted player, in-state 2007 prospect Eric Wallace, who they offered, as well.


Interesting post, though I'm not sure where he got the idea that Julius Hodge was "shunned by most elite programs." Even if that were true, it doesn't change the fact that Julius was considered by many to be among the ten best high school players in the class of 2001.

Duke probably lacks the defensive steel to win the NCAA unless Nelson regains form and stays healthy, but J.J. Redick (25.3 points a game) and Shelden Williams (9.6 rebounds, 18.8 points) can carry a heavy load.

"Probably" belongs beside "almost" in contemporary basketball language, words with fluid definitions. Illinois, which lost three of the top four scorers, probably shouldn't return to the Final Four, but it could.

N.C. State probably shouldn't win the school's third national championship, but you can almost hear Jim Valvano's hoarse voice endorsing the possibility. In 2006, with the gates wide open, the Wolfpack stands its best chance since 1983.

Cardiac Pack II? This winter, two dozen teams - including some you haven't yet considered - will labor in the pulsating frontier between heartthrob and heartbreak.