Take a look at the Duke Scouting Report, which is courtesy of Ken Pomeroy and his increasingly-awesome work. As usual, the Blue Devils are well-rounded--they have the best offense in the country and one of the best defenses in the country.

The product of their excellence at both ends is a gaudy efficiency margin (OFF EFF - DEF EFF = EFF MARGIN): 0.415 points/possession. So Duke is gaining .415 points on its opponent for every possession in a game. For an average game that runs around 70 possessions, that efficiency margin translates into a 29 point edge for Duke. Of course, Duke's efficiency margin is going to shrink considerably in conference play (it's about .200 through four conference games), but you get the point. Success at both ends of the court is what separates the great teams from the rest.

Uh...at least there is one thing they don't do very well (and as we will see, they don't rebound well at the defensive end either). Rebounding is one of the areas in which the Duke offense has changed from last season to this one. In 2005, the Devils ranked in the top 40 in OR% and grabbed almost 37% of available offensive boards. The regression in this area hasn't been detrimental to the team's offensive efficiency, though, because Duke has improved in each of the other three factors.

They're not turning the ball over, and in addition to being the best shooting ACC team from the field, they also lead the conference in free throw percentage (76.8%).

The other change to Duke's offense is less significant but still worth noting. With Daniel Ewing gone, the Blue Devils are getting about 27.1% of their points from behind the arc--down 6.6% from 2005.

If State is going to win, Duke is going to have to have an off shooting night. That sounds obvious, but it's the bottom line. We're just not going to keep up with them otherwise. In lieu of poor shooting, turnovers are a great way to make your opponent inefficient...but you have to be able to actually force them. Remember when BC's excellent TO% matched up with our inability to force turnovers? The Eagles only committed six.

If the Devils limit their turnovers to some disgustingly low number like that, State has no chance.

Sean Dockery (6-2, 185) -- Dockery fits his limited role well--evidenced by his excellent O Rtg. Not lauded for his jumper, but has done a good job from behind the arc over the last two seasons. He's one of the better guys in the conference at getting steals.

JJ Redick (6-4, 190) -- Great players play efficiently even at high usage levels. Redick maintains an O Rtg above 120 despite using nearly 29% of his team's possessions while he is on the court. That's damn impressive. But it's not surprising because JJ is the best player in the history of mankind. Like, he would never go, say, 3-18 from the field in a game. Never. He's just way too awesome. In fact, I bet he scores 50.

Josh McRoberts (6-10, 230) -- Like everyone not named Williams or Redick, McRoberts is filling a secondary role, and maybe that's why there seems to be some disappointment about his production. Needs to work on his rebounding, but he shoots the ball well and has a low turnover percentage.

Shelden Williams (6-9, 250) -- Williams has the best rebounding percentage in the ACC (18.3%), and as is evident in looking at the scouting report, he rebounds well offensively and defensively. He also leads the ACC with 4.7 blocks/40 minutes. He is averaging 23.2 pts/40 on 61.2% shooting and has a low turnover rate (despite high usage) to boot. 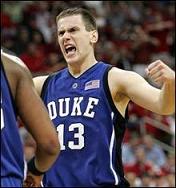 "Did you see how I
freakin' nailed that shot?"

I'm not sure if DeMarcus Nelson (6-3, 195) is going to be able to go. If he can't, Lee Melchionni (6-6, 205) is going to have to pick up the slack. I'm guessing it takes him about five minutes to regale the viewing public with one of his Annoying White Boy faces. Melchionni's shooting numbers are down a bit this season, and he has the lowest PPWS (1.10, which isn't bad in its own right) of any Duke player who gets playing time.

The Wolfpack offense has been really good over the last two games but it hasn't had to deal with a defense like this one. Playing in Cameron against a Duke team that forces plenty of turnovers isn't a very happy thought. I'm only askin' for two things: 1) decent shooting from the Pack, 2) consistent officiating.