This is a lot easier the second time around. Here's the Miami preview that I posted prior to the first meeting, and all of the relevant team and individual statistics are available in the scouting report.

Some notes based on the events since our last meeting:

-- Miami is still giving up a big chunk of points from behind the arc. Miami's defense ranks 9th in the ACC in adjusted defensive efficiency (64th nationally). 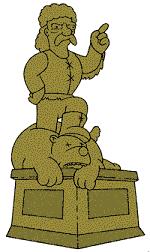 -- Let's give King and Gary Hamilton some credit...maybe they aren't lethal weapons, but they can do some damage. A sort of billy club to the guards' pistol. King and Hamilton are blunt objects with which Miami pounds opponents into submission, but they're generally not dangerous enough to render a fatal blow.

-- Although nine guys have played in every conference game this season, the Canes' rotation is closer to seven: Diaz, Hite, Harris, King, Clemente, Hicks, Hamilton. Anthony Harris's in-conference O Rtg is 101, Hicks's is 103, and Clemente's is 85. Poor Denis is only making 36.3% of his shots. Hamilton's offensive rating (114) looks nice, but a lot of guys would look good with a %Poss under 10%.

-- Barring a performance like Sunday's, NC State should victimize the Miami perimeter defense like it has in the last two meetings.

-- Miami isn't turnover-prone (except from my man Anthony Harris), so (per usual) it'll be a challenge for the Wolfpack to maintain a positive turnover margin.