We love you too, Dave.

Share All sharing options for: We love you too, Dave.

"(N.C. State) has the worst fans ever," Noel said. "I told (my teammates) that you will hear something that you never thought you’d hear a day in your life.

"That’s just the way fans are, especially at State. Just focus out, focus on the court. Just be prepared to play 40 minutes of basketball, because it’s a lot more fun at the end of the game when they’re quiet." 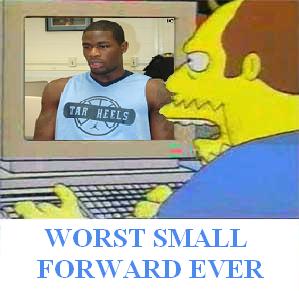 Noel said he has come to expect one thing at N.C. State’s place: a few vulgar comments. His worst memory came during a game in 2004 when fans shouted "S.T.D., S.T.D." — for sexually transmitted disease — at swingman Rashad McCants.

"I don’t know where they got it from or anything like that," Noel said. "It shocked Rashad, too. We were all like ‘wow.’

"The coaches kind of made fun of it. They thought they were chanting SUV, so it was kind of funny for the most part."


If ever there was a perfect example of WTF Face, it was McCants's expression as he stood at the free throw line listening to the "S-T-D!" chant. It's lamentable that only 20,000 people were able to see his reaction (via the arena jumbotrons).