Welcome to the atrocity exhibition.

Share All sharing options for: Welcome to the atrocity exhibition.

Y'know, I was angry, but now that I have had a chance to look at the offensive and defensive efficiency numbers for each team, I've transitioned to a mixture of frustration and awe.

Carolina scored 95 points on 63.5 possessions, which comes out to an offensive efficiency of 149.6. I have never seen anything like this. There's nothing from this season--absolutely nothing--that even approaches this number. Duke and UNC have both managed to break into the low 130s this year, but that's as close as anyone's gotten. 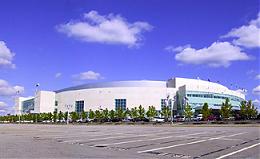 This is the way; step inside...

In checking my numbers from last season, I found that Wake Forest managed 140.9 against Clemson in 2005, but that's still a pretty distant second.

We were just subjected to an offensive performance for the ages. And I thought the night couldn't get more embarrassing. Averaging 1.5 points per possession for 40 minutes...that's astonishing. You will not see a more complete offensive effort.

It's better to react to this information with bewilderment rather than with disgust. If you don't laugh, you'll only end up crying.

So... How to pick up the pieces? NC State had no intensity, no energy, and no answers. Sendek was asked why the effort was lacking and had no explanation. There is no explanation.

The Heels played so well that didn't need State's help, but they got it anyway. When NC State wasn't playing lazy defense, it was playing confused defense. Mental lapses occurred one after the other; the Heels had great looks without having to work hard for them. When Carolina actually missed a shot, it just grabbed the rebound and took another crack at the basket. Here's how to score 1.5 pts/possession for an entire game: shoot 61%, grab over half of your misses, turn the ball over just six times.

I hope that the Wolfpack can put this mess behind them, but I'd be lying if I said I wasn't concerned. Tonight's loss wouldn't have been so disturbing (nor so lopsided) had NC State simply played hard; that we didn't play hard in a game of such obvious importance is more than a little perplexing. We'd better be ready for Boston College, because the Eagles aren't going to be feeling sympathetic.