Share All sharing options for: Everything's Comin' Up Milhouse!

This is one of those days you gotta savor.

-- Mario Williams will be the first pick in tomorrow's NFL Draft.

-- The NC State softball team swept North Carolina in a doubleheader to win the ACC regular season title. The program is only in its third season and plays without a stadium of its own.

Back in 2003, more than twelve months before the softball program would play its first game, head coach Lisa Navas said she expected to make progress quickly:

Where I see this program going is in the top-3 teams in the conference, and it will be hard for me to wait for that to happen because of not being patient sometimes. It is an ongoing battle because of being in such a tough conference. In three or four years we'll be in the top of our league and be a nationally ranked team.


Three years later, here they are--at the top of the ACC.

-- Most importantly today, the Hurricanes' 3-2 win over Montreal evens the series at 2-2.

Rod Brind'Amour scored 5:54 into the third period to give the Carolina Hurricanes a 3-2 victory over the Montreal Canadiens and tie the first-round playoff series on Friday night.

The second-seeded Hurricanes, who won despite blowing an early lead, dropped the first two games of the best-of-seven series at home but swept two straight in Montreal. Game 5 of the Eastern Conference matchup will be Sunday night at Carolina.

Brind'Amour, who has four goals in three games, made his third opportunity to score the charm for Carolina as he jumped on a loose puck behind Cristobal Huet and banked a shot in off the Montreal goalie. 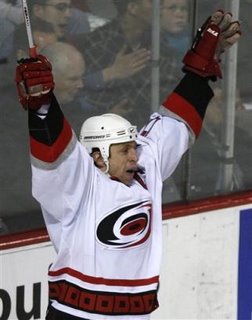