I got a kick out of this:

"If North Carolina State offers him $2 million, I think John should interview there because he's not going to get $2 million here," Bertman said Wednesday afternoon. "That would be outrageous. Nobody in the SEC makes $2 million."


Bertman's candid comments remind us why tact is for losers. What Bertman says isn't a revelation--of course he's not going to more than double Brady's current salary--but I am surprised he would be so explicit about it. That can't be good for coach-AD relations.

Later in the article (emphasis below is mine):

Until LSU's Final Four run, which included a stunning upset of Duke, Brady was unpopular among fans, particularly on the Internet, and struggled to fill the Pete Maravich Assembly Center. He does not always display a warm media personality either.


So on the plus side, if we hire Brady, he'll feel right at home. 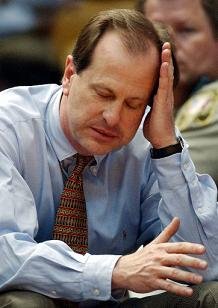