The evening began in nightmarish fashion, but it didn't take too long for the Hurricanes to answer Brian Gionta's early goal. Once the Canes were unhindered by penalties, they reasserted themselves and clamped down on New Jersey--Carolina outshot the Devils 26-7 over the last two periods. Quite a contrast to Saturday.

I hadn't seen much of New Jersey this season, so as I watched this series I was surprised by their lack of scoring depth. The Devils looked more like a six-seed (which is probably what they would have been without that ridiculous winning streak to end the regular season) to me than a three-seed. Beyond Elias, Gomez, and Gionta, there wasn't much to fret about. Gomez, by the way, rocked the playoff 'stache rather than the playoff beard. I wonder if that angered the hockey gods. 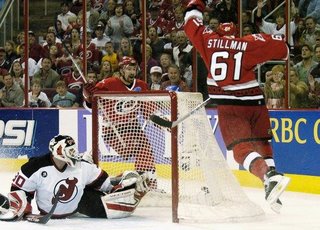