Larry Davis will attend Seton Hall. We're officially hurtin' at the guard spot. Atsur is going to be playing at the point a lot--probably more than he'd like. I've always felt that Atsur is out of position at the one, but we have to make do.

We just have to hope that Fells and Ferguson prove to be reliable ballhandlers. Gavin Grant will no doubt play in the backcourt too (this is assuming he's not deported), but he shouldn't be put in a position where he's bringing the ball up with any sort of regularity. Gavin has been the team's most turnover-prone player over the last two seasons.

Today is not without some good news: the baseball team beat UVA, 4-3, and that puts the Wolfpack in great shape for the rest of the weekend. NC State will not play again until Saturday, when it will face the winner of tomorrow's UVA/FSU game. UVA/FSU would have to beat NC State twice on Saturday in order to advance to the ACC championship game. 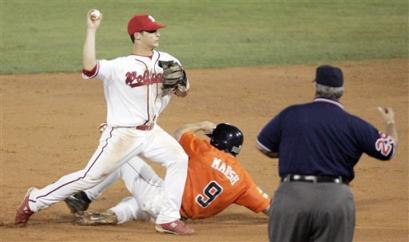