It's games like tonight's that make me wonder how it is that there are so many people who don't like hockey. I mean, come on, y'all! This is compelling sportstainment! Hitting! Near-fisticuffs! Numerous "oh-yeah?-well-what-are-you-gonna-do-about-it?"s! Up-and-down action! Goals. Lots of goals.

And tension. Oh, god, the tension.

I don't think I will ever be more jealous of an RBC Center crowd than when Eric Staal scored his miracle goal against New Jersey in game two of that series, but I came close tonight. I coulda been there; I of course wish I had. I chose to game two instead (fn. 1).

As difficult as it is to watch the Hurricanes have to fight back from so many deficits, those comebacks have served to remind everyone not to be panicked by adversity. There was a time last December when two-goal deficits almost felt comfortable. Fall behind early. Rally. Win. Not exactly the most ideal of routines, but when the wins are coming, you don't ask questions.

In the second game of the Montreal series, Carolina fell behind 0-3 before rallying to tie and take the lead, only to lose the lead in the third period, tie the game late, and then lose in (double) overtime. Despite the loss, the Canes found something they liked, and they would go on to win the next four games.

The Sabres had a 3-1 lead on the Canes in the second period of game five, which set the stage for the most crucial comeback in a season full of them. Cory Stillman would put it away in overtime.

And so tonight. Edmonton scored first after Cam Ward couldn't get control of a rebound, added a second on a Chris Pronger penalty shot, then tallied a back-breaker thanks to an unfortunate ricochet. Seemed like a back-breaker, anyway--but I'm usually not optimistic, regardless of what history might offer me.

Good fortune got the Hurricanes on the board near the end of the second period. Dwayne Roloson handled a shot from the left side, but the puck trickled through him to a waiting Rod Brind'Amour. Normally, Roloson doesn't let that puck see the light of day. Brind'Amour dunked it home.

The third period contained some of the most exciting hockey you'll ever see. Ray Whitney evened the score with two goals in the first five minutes. At the midway point of the third, Justin Williams broke away shorthanded, and he gave Carolina the lead, 4-3. Look at scoreboard. Look away. Blink. Look back at scoreboard. Whoa.

Edmonton got even just a few minutes later on a beautiful power play goal by Ales Hemsky. Hemsky's shot was one of 18 for the Oilers in the period. That ended up being the only third-period goal the Oilers got, but it wasn't for a lack of premium chances. Cam Ward robbed Shawn Horcoff twice; the first, which came between the Williams and Hemsky goals, was absurd. Just a totally unpossible deflection with the glove hand. The second came with less than four seconds left in regulation: Horcoff had a tough angle, but still a lot of empty net to look at. Ward managed to get to the left post in time, and Horcoff fired the puck into his glove.

A faceoff and a shot around the boards later, time expired. 5-4.

The story of the game will be Dwayne Roloson's injury--and poor Ty Conklin. Conklin was put in an impossible position and made a puckhandling gaffe that cost his team the game. I feel awful for him. Now that Roloson is done, the Oilers are probably going to need him (after the game, MacTavish was noncommittal about who'd be starting).

Here is the recap. Near the top is a link to Yahoo!'s highlights. I dare ya to watch them just once. 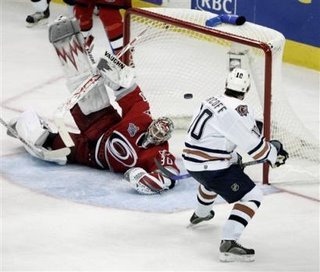 1) Mind you, should the Canes manage an easy win on Wednesday, I won't be complaining.