Former Gov. Jim Hunt has campaigned for Shuler, and former Sen. John Edwards plans to do so this week. Former Ambassador Jeanette Hyde is planning a fundraiser for Shuler at her Raleigh home Sept. 11. That event is sponsored by Democratic members of the Council of State.

A new poll shows Shuler, a former University of Tennessee quarterback, leading Taylor 48 percent to 43 percent. The survey was was taken by OnPoint Polling and Research, a Raleigh firm formed this year by pollster Dean Debnam and Democratic political consultants Mike Davis, Tim McKay and Bob Havely. The automated telephone survey of 731 likely 11th District voters was conducted Aug. 14 and had a margin of error of plus or minus 3.6 percentage points. 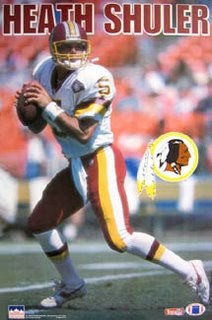 Heath Shuler, seen here throwing a touchdown for the people.