Share All sharing options for: Football And Win Probability

An interesting item from The Book Blog highlights a story about a new football computer program:

Zeus is a computer program developed by End Game Technologies that models and predicts the outcomes of coaching decisions in football games. The program is designed to produce statistical outputs showing the expected odds of winning given choices of potential play calls and roster choices. It is capable of simulating 1,000,000 games in a few seconds, and was developed using extensive research on historical data from NFL games. It expresses its output in terms of Game Winning Chance, ie the probability that the specified team will win the current game. It also evaluates its output using a range of possible "worst case" scenarios to determine a Confidence Factor of 1 to 10 for its results.

Zeus is particularly geared toward evaluating situations where a coach has essentially two or three play decisions which the opposing team will recognize. An example would be if a team is on fourth down and short yardage, and needs to decide between trying to get first down, punting or kicking a field goal. In such a case, Zeus will output its analysis of the game winning chance if you Punt versus if you try a short yardage play or kick the field goal. Another example would be, when your team is preparing to kick off, the chance of winning if you kick off normally versus attempting an onside kick.


"Game Winning Chance," as the program's developers call it, is just a fancy-pants way of saying "win probability." Zeus analyzes the situation and then recommends the course of action that maximizes win probability. It can also be used to take a retrospective look at all of the plays in a game and illustrate how a team's win probability fluctuated from play to play. Like so: 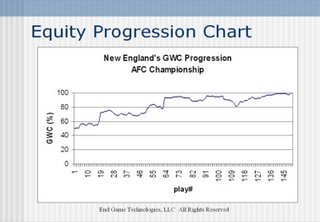 Totally cool. And very similar to the Win Probability Added concept from baseball.

Can you imagine if a football version of Fangraphs was readily available to college football fans? "Chuck's decision to punt in the fourth quarter against UNC lowered our win probability by 3%! Fire Chuck!!1"