Takin' A Look At Akron

Share All sharing options for: Takin' A Look At Akron

Would you like a useless Akron-related fun fact? Of course you would!

The university's mascot is "Zippy", a kangaroo. Zippy is one of only two female college mascots in the United States.


Right, then. Moving on.

While the Zips are returning 16 starters from a year ago, they're still missing some big pieces. For instance:

All statistics are from 2005. Biggs accounted for 88% of Akron's rushing yards. He was also second on the team in receptions to Hixon.

Akron's most experienced returning wide receiver is Jabari Arthur, who had 30 catches last season. Luke Getsy will also rely on tight end Kris Kasparek, who caught 27 passes. Beyond them, though, experience is hard to come by. The guy behind Arthur on the depth chart is Johnny Long--Long made 15 receptions all of last year. At the other receiver spot, three players--Jermaine Lindsay (RS-Fr), David Harvey (FR), Brandon Williams (SO)--are listed on the depth chart. In '05, Lindsay was redshirting, Harvey was still in high school, and Williams saw action in two games, and he did not make a reception. 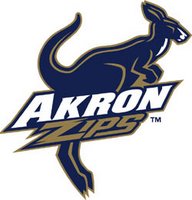 The man replacing Biggs in the Akron backfield is sophomore Dennis Kennedy, who ran for 131 yards on 45 carries (2.9 YPC) last season. Fortunately, he's got the entire offensive line back to help him out. Based solely on the Penn State game, it looks like Kennedy will be utilized in the passing game like Biggs was. Kennedy had eight receptions against the Nittany Lions--lots of check-downs from Getsy, I'd imagine. Kennedy only managed 59 yards on 25 carries against PSU, and I think we can hold him to similar figures.

A man to keep an eye on is defensive end Jermaine Reed (#99). Reed led the Zips in sacks and was second to White in TFL.

Akron also has (and I'm trying not to drool as I write this) new starters at placekicker and punter. Maybe we could block a punt or four.


It's always hard to know what to make of the numbers posted by mid-majors. The 2005 defense looks solid on paper, but the Zips played six teams that ranked 101st or lower in total offense. They faced the four worst offenses in the MAC while avoiding the best (Toledo).

Regardless of how good they really are defensively, we've seen more than enough of our own team to know that Marcus Stone isn't likely to make them look bad. I don't want to say it's all on Andre Brown's shoulders, but...yeah, it's all on his shoulders. Per usual.

With the crappy offense we're cursed with, there is nothing more critical to our chances of winning a given game than turnover margin. Our special teams are superior to Akron's, and as long as we don't gift them any points, I think we'll be able to grind out enough scores to win.

But color me fretful. Good opposing QBs are scary.