-- An encouraging and dominant performance by the defense tonight. The Mountaineers managed a few runs for 10+ yards and hit that one nice pass play, otherwise they were totally contained. The defense did an excellent job bailing out the offense after turnovers. After Toney Baker's fumble and the ensuing scoop and scramble by an ASU defender, the Mountaineers had the ball in the redzone. Miguel Scott came up with a huge interception to snuff out the scoring opportunity. And after Marcus Stone's INT in the third quarter, the defense sacked Trey Elder a couple of times on the subsequent ASU possession. Whatever momentum they gained from the takeaway was quickly lost when they started going backwards.

Thanks to the way the defense was playing, I never really felt like the outcome was in doubt. It sure as hell would have been nice to have a three-possession cushion, but it was apparent that one wouldn't be necessary. You know, if we would just hang onto the ball.

-- It was a beautiful day for football. Couldn't have asked for better weather.

-- John Deraney didn't get any field goal attempts but looked sharp with the other stuff. He didn't seem affected by the smaller tee--three of his four kickoffs were touchbacks, and the fourth went about five yards deep. ASU decided to return that one, which proved a terrible idea (the return man was tackled around the ten).

-- Appalachian State's gift of a safety on, what, the second play from scrimmage of the game? That snap was way over the quarterback's head.

-- Took Darrell Blackman a while, but he inevitably got loose on a kick return. His catch-and-run for a TD was nice, too.

What I didn't so much care for:

-- Runningback draws from the shotgun. This play is the bane of my existence. Why is it back in use? Why, Trestman? Why? We started the game in the shotgun, with Stone having Baker and Brown to his left and right. Seems like we stuck to the formation for the first couple of series, not getting much out of the ground game. When we ran the ball with Stone under center, it was more effective.

Tear that play out of the playbook, Mark. Please.

One of my friends remarked that while he was walking out of the game it almost felt like a loss--because the game was so boring. Our offense is an aesthetic atrocity. A crime against football.

-- Four turnovers, two of them careless. A poor snap to Stone out of the shotgun resulted in a lost fumble, and JC Neal's collision with Darrell Blackman on a punt return resulted in another. I'll chalk those up to this being the first game.

Stone's INT came when he made a hasty decision with a couple of guys in his face. It was on the ASU side of the field and didn't end up hurting, although it may have ended a would-be Wolfpack scoring drive.

Two of the turnovers gave ASU the ball inside the 20; fortunately it only got three points from those two possessions.

-- Stone's passing numbers are discouraging even though I know that the coaches (1) were going to be extremely conservative as long as the team had a two-possession lead and (2) didn't want to give future opponents much to look at on film. Those factors limited Stone's overall attempts and his downfield attempts.

Stone just doesn't look any different to me. Same happy feet, same crap-it's-time-to-duck-and-run tendency. After 2004 and 2005, I don't have much patience left. I'm tired of waiting for our quarterbacks to mature. 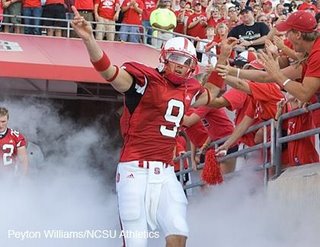