I Guess I'm Not As Well As I Had Hoped

Share All sharing options for: I Guess I'm Not As Well As I Had Hoped

When we held Wake to a field goal near the end of the first half, I felt good. We were going to go to halftime with the lead despite having been down 10-0 and having missed some opportunities. Then the Wolfpack decided to cripple themselves.

State missed so many opportunities, from Anthony Hill's drop on the first drive and Deraney's subsequent missed field goal to settling for three on a long second-half drive to blowing the two-point conversion, that it's driving me nuts today. We squandered those scoring chances and a good performance by the defense to boot.

To the Deacons' credit, they didn't make the big mistake that we needed in the second half. They kept Riley Skinner's workload as light as they could and they ran the reverse effectively in key situations all day. I'm sure the Pack saw plenty of film on the reverse, so the fact that the play was successful every time it was called shows you how timely those calls were. Right after we took the lead 14-10, we had Wake in 2nd-and-13 at their 19 yard line before the Deacs ran a reverse for 37 yards (Garland Heath sure looked slow on that play). That was a significant turn of events in the game. A three-and-out there forces Wake to punt from deep in its end and gives us a chance to go up 17-10 or 21-10 before halftime. Another occasion where they made the play and we didn't.

Where was our pass rush? I thought we would force Skinner to make a couple of mistakes as long as we could put some pressure on him, but we couldn't do it. Skinner was able to convert a 3rd-and-long on Wake's opening drive because he had all kinds of time. They'd be in the endzone shortly thereafter. It's a good thing for us that Skinner didn't throw a lot, because my man could've sipped gatorade and eaten a cookie before having to get rid of the ball.

On the plus side:

-- State was 6 of 12 on third downs and would have been better than that if Anthony Hill would catch the damn ball (there may have been other drops on third down, but none come to mind).

-- Evans continues to look sharp. He didn't get a lot of help from his receivers, though there were probably a handful of times where he missed the open guy. When Wake blitzed, he made them pay. It's a matter of time before we score 30+ in a game.

-- Only five penalties for 35 yards. Since Evans took over, we haven't committed more than seven penalties in one game.

-- Called too many of those quick passes to a receiver right at the line of scrimmage. A couple of them were batted down.

-- Andre Brown's ineffectiveness understandably limited his touches, but he should never have fewer than 10 carries in a game.

-- The coaching staff wasted some timeouts, though we had plenty of time for the potential game-winning drive. 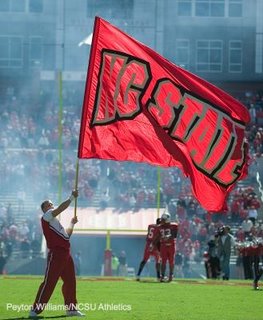