If NC State had been able to cash in on one of its missed opportunities--Toney Baker's fourth-down run or the drive that was killed by an offensive pass interference call--it would have scored 30+ points against a I-A opponent, ending a drought that has spanned more than a season.

That we didn't get to 30, though, should hardly be discouraging. With Evans under center, the offense is viable again. He's so calm, he might as well be back at Broughton throwing TDs to his brother. There isn't that sense of frustrated resignation anymore. I don't worry that the game is moving too quickly for the guy throwing the ball. And if we have to punt, that's okay, because we feel pretty good about moving the ball on subsequent possessions. Statistically, Florida State had the best defense we'd seen in 2006, and we still managed to rack up a season-best 340 total yards.

-- No one would have been surprised if we'd come out throwing the ball, trying to test Florida State's secondary; instead of doing that, Trestman elected to lean on the run. We ran the ball on 17 of 27 (63%) first downs against the Seminoles, compared to 11 of 23 (48%) against BC. Evans was 4-8 on the first down passes he threw (he scrambled on two others for neglible gain), which is a big improvement on his 3-11 performance against BC.

-- While the offense was better in general, third down remains a struggle (25% converted against FSU).

-- On short-yardage plays (three yards or less for a first down), the Pack converted a first down once in four tries.

-- Andre Brown averaged 6.3 yards per carry and came into the game averaging 6.4 YPC. SMQ doesn't think Brown should be splitting carries, and I am beginning to agree. Not that Toney Baker has been bad (4.1 YPC on the season). Brown hasn't carried the ball more than 18 times in any game this season; I wouldn't mind seeing him get 25 against Wake.

-- There are several plays I would like to see again: Toney Baker's fourth-down run, the offensive pass interference call, the FSU touchdown pass that was reviewed, and Weatherford's fumble at his own five that was scooped up by an FSU receiver. I thought based on the scoreboard replay that Baker had scored, but since they did review the play and it ended up a moot point anyway, I won't complain. 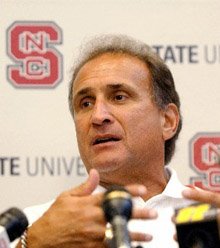