Michigan/Ohio State? Pffft. I want to know who wins the Telephone Trophy.

Share All sharing options for: Michigan/Ohio State? Pffft. I want to know who wins the Telephone Trophy.

Mizzou and Iowa State battle for the dual-colored trophy that reminds me of a gummy worm for some reason.

When the coaches’ field phones were tested prior to the 1959 Iowa State-Missouri football game in Ames, it was found that the teams could hear one another. The problem was solved by game time, but not without considerable worry on the part of the coaching staff. The Northwestern Bell Telephone Co. of Ames had a trophy made after the field phone controversy and it continues to be presented today to the winner of the game between ISU and Mizzou. An odd sidelight to the whole affair was that the same thing happened to Missouri later that year in a game played at Columbia, Mo. 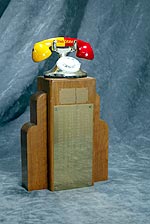 Winner gets to crank call the loser for the next 12 months.

McCarney: Dan McCarney here.
Pinkel: Hello, I'm looking for a Mr. Strap, first name Jacques.
McCarney: Oh... So you're looking for a Mr. Strap, eh? First name Jacques is it? Listen to me, you! When I catch you, I'm gonna pull out your eyes, and shove 'em down your pants, so you can watch me kick the crap outta you, okay? Then I'm gonna use your tongue to paint my boat!