You think we have problems? Homer Drew don't even want to hear about it, son.


His top five minutes-getters from 2006, including the most excellent Dan Oppland, are gone. Also, returning point guard Jimmie Miles was arrested and put in jail for his supposed involvement in a stolen cell phone ring. Good heavens, Jimmie. The timing. The timing!


As is my custom, I will post Valpo's numbers from last season--though, obviously, with all these changes in personnel, this year's squad may not come close to resembling last year's. Grain of salt and all that.

Valpo Offense 2005-2006Four FactorsPercentNat'l RankeFG53.237Turnover Rate20.2102Off Reb Rate33.6121FTM/FGA24.1197
Through their first few games of 2007, the Crusaders do look pretty much the same as what you see in the above table. Good shooting, mediocre at avoiding turnovers and getting offensive boards.

Playing Valpo should be instructive because the Crusaders are bigger than Wofford and Delaware State, and the Crusaders are less reliant on shooting threes. The guards, in addition to having little experience, have not been doing the bulk of the scoring. Valpo will give us the most action in the block that our defense has seen this season. 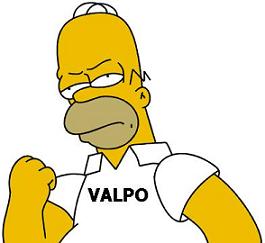 "Damn you, inexperience!"some nuggets/tendencies about guys. His turnover rate this season is a brilliant 4.5%, but that is with low usage. Gets good marks for his posture.

Shawn Huff (6-6, 205) -- Tied for the team lead in field goal attempts this season and a definite threat from beyond the arc.

Caleb MacLeod (7-1, 245) -- He's a Kiwi. And a very good offensive rebounder (at least so far; we're talkin' about three games here)...good defensive rebounder, not so much. Also, he is tall. Turnover prone.

Urule Igbavboa (6-8, 220) -- What's the over/under on "U Rule, Urule!" signs at Crusaders home games? Actually, if someone could go ahead and make one for Tuesday, that'd be killer. Igbavboa has been vacuuming up the defensive boards like crazy; he has 38 total rebounds in three games, and 35 are defensive. He's averaging 17 points and 12.7 rebounds per game. His defensive rebounding percentage? An obscene 30.1%. What's funny is he's absolutely horrendous at the other end--a total non-factor on the offensive glass. This is the player to watch on Tuesday.

Samuel Haanpaa (6-8, 215), who is listed as a guard despite his height. Ten of his 11 field goal attempts have been threes, which smacks of three-point specialist.

Jarryd Loyd (6-0, 170) is the lone returning starter from 2006. Turned the ball over a lot last season. Looks like a good three-point shooter.

Valpo Defense 2005-2006Four FactorsPercentNat'l RankeFG50.4203Turnover Rate19.7263Off Reb Rate28.228FTA/FGA39.6236
Valpo's defense was ranked 222nd in adjusted defensive efficiency last season. Teams shot well against them and they couldn't force turnovers, so teams got plenty of attempts. The only thing they did competently was defensive rebound. They weren't proficient at generating steals, and that's held true through three games this season.