Everybody Looks Better In Red

Share All sharing options for: Everybody Looks Better In Red

Tom O'Brien is no exception. 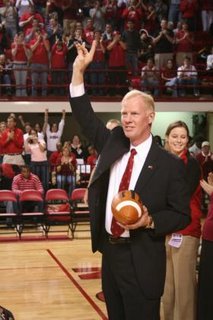 "When I got involved in the search, we were really looking for someone who would take care of our student-athletes and win football games and do it the right way," Fowler said. "Everybody I talked to said, ‘Tom O’Brien is all about integrity, all about the student-athlete and he all about graduation and, most of all, he is all about winning.

"I called Craig Littlepage, who is the athletics director at Virginia, and he said, in short order: ‘He is one of the best men I ever met and one of the best football coaches I have ever been around.’"

O’Brien left an extremely positive impression on those who were in attendance, just as new men’s basketball coach Sidney Lowe has impressed everyone during his first seven months on the job.

"I do believe this is a home run," said Wendell Murphy, the chairman of the NC State Board of Trustees. "He told us exactly what he is all about. He is about winning championships on the field. He is about having discipline off the field, graduating his players, getting everyone their degrees and becoming productive citizens.


Since I got over my initial disappointment on Wednesday, I've really warmed up to O'Brien. I'd said it was hard to muster enthusiasm for him; I was wrong. I'm looking forward to 2007, looking forward to NC State football being fun again. Now that TOB is here, I think we'll be enjoying ourselves sooner rather than later.