No, This Seven-Game Losing Streak Isn't Slowly Crushing My Soul, Why Do You Ask? (pt. I)

Share All sharing options for: No, This Seven-Game Losing Streak Isn't Slowly Crushing My Soul, Why Do You Ask? (pt. I)

This is part one of my 2006 football retrospective.

The First Third: It's Early; I Think I'll Just Have A Soda

The days leading up to the start of the 2006 season passed smoothly enough, albeit the time felt like it was dragging. I learned the location of my season tickets. Carolina adopted a motto that's even funnier in retrospect. The team practiced with like pads and stuff.

It was hard to know what to take away from the Wolfpack's August scrimmages; firsthand accounts from GoPack.com were typically vague and sugarcoated. One thing they couldn't obscure with empty superlatives: Marcus Stone's completion percentage. Two numbers separated by a dash; cold, hard statistical evidence that couldn't be dressed up or distorted. No matter how glowingly Amato spoke of Stone, there was a "yeah, but..." in the form of: 17-38 (44%).

Rather than face what those numbers implied, I went into denial.

September finally rolled around, and with it, the opener against Appalachian State. Not much felt different. A lot of words came to mind as I sat perched in the temporary bleachers..."new and improved," uh, not among them. Although NC State limited its offensive gameplan so as not to give anything away to future opponents, the bad indicators were tough to ignore. Poor third-down conversion rate. A bunch of turnovers. Thirty-six passing yards. After the game, I wrote, "Our offense is an aesthetic atrocity."

But, y'know, we did win. It was nice. If I'd known it would become a collector's item, I'd probably have savored it a bit more.


What? If the alarm bells weren't going off the previous week, they were now. The team showed some life in the second half, and we rallied, but the Zips, like every other team we play, waited for us to do something stupid. Mis-managed clock + Andre Brown running onto field lidless + defensive lapse = stunning last-second defeat. Officials take their buzzers and smash them on the ground, making haste for the locker room. Amato vainly gives chase, but the deed, regardless, is done. The Zips form a celebratory heap in the endzone, then jog to the lockers under a hailstorm of angry soda bottles, making sure to offer one last wave goodbye. They then proceed to suck for the rest of the season.

I thought this loss might prove the difference between a bowl game and a losing season. Hah!

When Michigan limped to a 7-5 record in 2005, UM bloggers dubbed it the "Year of Infinite Pain." Michigan lost a lot of close games, but they beat their in-state rival and earned a bowl bid. That's not infinite pain. This--getting outplayed by a MAC school that would end up with a losing record--this was infinite pain.

"This is one of the worst losses that we've had in the past two years," Heath said. "Losing to Akron is a disappointing loss. We've just got to learn how to start faster, instead of finishing faster, (and) learn how to play hard from the beginning."


Against Southern Mississippi the next weekend, we neither started nor finished. USM's punter lounged around the sideline all night, taking leisurely sips of gatorade, soaking in the ambiance, taking a few practice kicks, admiring his clean uniform, that sort of thing. The Golden Eagles rolled up 442 yards--they never needed his services.

In our pre-game discussion, SMQ wrote:

Fletcher is small (in the 5-10, 180 range) and wasn’t very highly recruited, but he had pretty obviously supplanted last year’s ho hum combo, Larry Thomas and Cody Hull, by halftime against Florida; considering USM backs are routinely held under 2 yards per carry against that kind of defense, his 127 total yards against UF was probably the best individual performance by a USM running back since Derrick Nix in early 2002. He came back with 122 and two touchdowns against SE La. on more than six yards per carry. Because its success running the ball is disproportionately representative of USM’s overall success (this is statistical fact), it’s a pleasant surprise to have some optimism in that area against a not-terrible defense for a change.


Fletcher proved to be a terror; Southern Miss ran for 261 yards (177 of which were Fletcher's) and cruised to victory.

With the Golden Eagles ahead by three scores in the second half, NC State crumbled to pieces. This comment from my liveblog of the game sums it up:

Another personal foul on the Wolfpack. Glad we're keeping composure, because this isn't already embarrassing or anything.


How do you come back from that level of embarrassment? It would take a miracle. 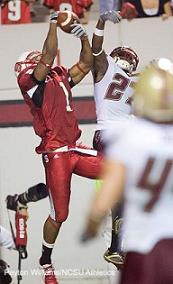 Sometimes, if only for one minute, one drive, one play, everything comes together. Parts that so often seemed to be working in opposition click into place, move in concert. Execution, I believe it's called.

It hadn't been a complete effort, or anything close. But we'd done enough in the preceding 59 minutes--limited dumb mistakes, played good defense--to put ourselves in a position to have an epiphany. And then we actually had it.

A pair of sharp Daniel Evans throws moved the Wolfpack to Boston College's 34 yard line. There was time left for a couple of plays at most; thankfully, we'd only need one. Evans took the shotgun snap, scrambled toward the line of scrimmage, and heaved the ball to the back-right corner of the endzone. I expected several Eagles to be there waiting for it; when I looked down, I saw John Dunlap positioning himself against a lone defensive back...

Away with you, despair. Welcome back, hope.

After the officials put the play under review, I overheard a nearby Wolfpack fan say, matter of factly, "he was out of bounds." I wasn't sure, so I assumed the worst. At which point I remembered we were sitting in stands that barely qualified as being in the stadium proper; like he could tell if the catch was legitimate. Before the moment had been ruined, the officials finished their review and let us know that the touchdown stood. We could all get back to hugging people we'd never met.