Julius Hodge Missed By Some Guy

Share All sharing options for: Julius Hodge Missed By Some Guy

-- From the Roanoke Daily Herald:

We missed you, Julius.

I don't particularly care for N.C. State, but for some reason I always liked the pencil-thin Julius Hodge when he played for the Wolfpack from ‘01 to ‘05.

He never looked like a gifted athlete, or even a great basketball player, but always seemed to get it done on the court when it mattered most. Even as a freshman, his awkward-looking jumper was able to give him 10.7 points per game -- tops for ACC freshmen.


-- This is unrelated, but I thought it was interesting: Tracking Warriors' win probability:

FSNBA has introduced a new feature on Warriors broadcasts that examines win probability based on statistics in the NBA over the past five years. The probability is predicated on five key factors -- home court, possession, time remaining, timeouts left and point differential.

The formula was devised by San Mateo-based ProTrade, an online company that treats sports like the stock market and assigns values to players and teams. At any point during a game, the ProTrade formula can show the percentage of times a team has won based on the key factors over the past five years.

ESPN.com has been using ProTrade's win probability figures in its NFL game recaps this season. For example, you can see that Tony Romo's botched hold increased Seattle's chances of winning from 15% to 72%. 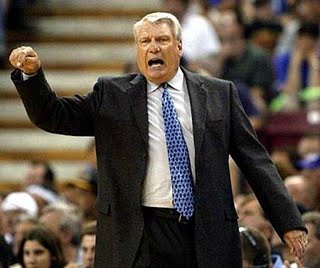 "NEVER tell me the odds!"