Share All sharing options for: Pitchers and catchers, baby. 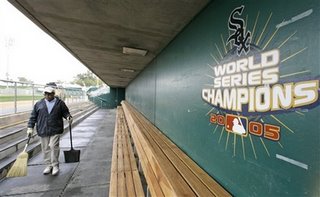 
Players are reporting to their respective spring training destinations this week, and Kerry Wood is injured, so that must mean the baseball season isn't too far off. It can't get here fast enough. Soon, the eternal struggle of Good versus Evil will resume--though the bad guys will probably win again. Those jerks.

I went to high school with three guys who could be everyday players in MLB this season: Brian Anderson (CF, White Sox), Ian Kinsler (2B, Rangers), and Chris Duncan (OF, Cardinals). Two of them already have World Series rings. Me, I have a blog that no one reads. But who's counting?

We weren't much for football or basketball while I was in school, but those Canyon del Oro baseball teams, as you might imagine, were always good. The Anderson/Kinsler/Duncan team won the Arizona state title in 1997; Anderson and Kinsler won another title in 2000, a year after Duncan graduated.