The Price Of Turnovers

Share All sharing options for: The Price Of Turnovers

Last week, Big Ten Wonk examined how effective B10 teams are when they don't turn the ball over. Which team scores the most points on possessions that don't end in a turnover? Letting no good idea go unborrowed, I crunched the same numbers for ACC teams.

Possessions are calculated like this: FGA + (0.475 x FTA) - OReb + TO
By just subtracting turnovers from each team's possessions total, then, we're left with turnover-less possessions.

(By the way, Gavin, you owe us 66 points for your 51 turnovers in ACC games. You can't really pay us back, though...does anyone know the points/wind sprints exchange rate?)

All of this leads to another question: whose overall offensive efficiency is helped/hurt the most by turnovers?

Conference games only:
Take turnovers out of the equation and Virginia Tech's offense is revealed as one that's actually quite pedestrian--relative to the rest of the ACC, anyway. The 1.29 points per turnover-less possession scored by the Hokies is just 9th-best in the league. But because the Hokies take care of the ball better than anyone else, their overall offensive efficiency is very good: 3rd-best in the ACC.

It's a similar story for Miami: nothin' special on turnover-less possessions--Miami is the worst shooting team in the conference--but ball security allows them to have an offense that ranks in the conference's top half.

On the flip side, there's NC State. Turnovers have made what is an otherwise decent offense into one of the worst in the league. And this is only tangentially related, but you want to know how much we suck at the secondary offensive factors--how much they drag us down? We're #1 in effective field goal percentage in conference play...and 10th in offensive efficiency. Thanks to turnovers and anemic offensive rebounding, the best shooting team in the ACC has one of the three worst offenses in the ACC.

Wake Forest and Clemson: well, they aren't any good regardless of whether or not they're turning the ball over. If you want to look at the glass as being half full, you can say that although Wake turns the ball over more than anybody else, it costs them fewer points (per turnover) than anybody else. So there is that. 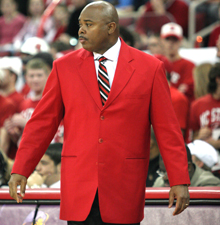