Take her down, Smithers!

Share All sharing options for: Take her down, Smithers!

The schmoozing must go on, winds be damned.

Due to high winds in the Raleigh area, the pilot of North Carolina State football coach Tom O'Brien and his crew said he was unable to get his airplane up in the air on Thursday afternoon.

O'Brien, who was hired to replace Chuck Amato on Dec. 6, showed his loyalty to his Wolfpack fans by getting into a Chevy Suburban with his entourage and making the long haul from Raleigh to Fletcher to arrive at 7:05 p.m. at the Wolfpack Club dinner at the WNC Agricultural Center's Pony Express Cafe. 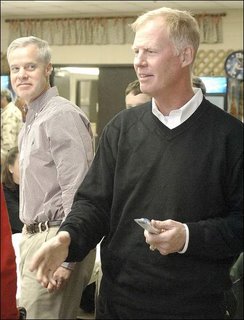 "Sorry about the landing, boys. This fog
is so thick I can't even see my own cataracts."