Taking Another Look At North Carolina

Share All sharing options for: Taking Another Look At North Carolina

Just, you know, this: 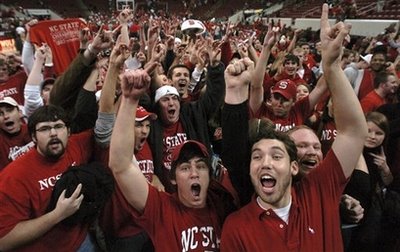 North Carolina's typically tough field goal percentage defense was no where to be seen, as the Wolfpack made 64.3% of its twos and 53.3% of its threes en route to a stunning upset win. Courtney Fells scored 21 points on 8-11 shooting, Ben McCauley didn't miss a shot from the field, and Engin Atsur added 10 assists.

In addition to shooting well, NC State rebounded far better than could have been reasonably expected. From my recap:

Getting the better of such a great rebounding team (the Heels are probably the best rebounding team we'll see all year) is no small potatoes. Carolina came into Saturday grabbing about 41% of their misses in conference play but only managed to grab 31.4% against the Pack. And with them not turning the ball over much, limiting their second opportunities was obviously a key to victory.


And it will be again.

What's been goin' on with UNC in the mean time?

The Heels have played four game since our first meeting, winning three times. They struggled with their outside shooting over that span (19-61, 31.1%), though, and their in-conference 3FG% ranks 9th in the league. The Tar Heels with 10+ three point attempts in ACC play:

Lawson and Terry have been deadly, while the rest reside in meh territory. It's a minor weakness since the Heels don't rely on the three very much, but it's hopefully something we can take advantage of.

How the hell do you beat Carolina in the Dean Dome?

You've simply got to catch them on an off night (the Heels shot 42.3% and scored 1.01 pts/poss in the loss to Virginia Tech), and even then nothing is assured because the Tar Heels play such excellent defense.

Best home defenses in conference play:
And for good measure, the best home offenses in conference play...
In today's N&O, Chip Alexander offers up a few things NC State needs to do in order to beat Carolina, but didn't touch on rebounding. In conference home games, the Tar Heels have grabbed 40% of their misses and 72.1% of their opponents' misses. They've dominated the rebounding at both ends and they've done it against some quality rebounding teams like Virginia and Georgia Tech. We have to match that energy. A big factor in Virginia Tech's upset in Chapel Hill was its ability to be competitive on the boards. The rebounding was basically even, and most importantly, the Heels were held to a low offensive rebounding percentage. The Hokies matched Carolina in second chance points, 13-13.

What else did Virginia Tech do? Protected the ball, for one thing: they committed 10 turnovers in the game, a 12.7% turnover rate. They got to the line a lot, which helped them offset a tough night from the field. They limited the pace: the game had 70-ish possessions in regulation, and that is right where we're gonna want to be.

From the N&O article:

Some wondered why the Heels didn't apply more fullcourt pressure against State, which has had some ball-handling adventures.

"We didn't do a good job of it," Williams said. "We allowed State to set the pace of the game."

Carolina had 10 fast-break points, a pittance for a team that likes to stay on fast forward and can be lethal in transition.

"We took our time and did a pretty nice job of keeping control of the tempo of the game," NCSU coach Sidney Lowe said. "The key was we were very patient on the offensive end, took what was there and obviously were able to knock down some shots."


In addition to being patient, we'll also need to do a better job avoiding turnovers this time. We turned it over on 30% of our possessions in Raleigh and had a -10 turnover margin. Under normal circumstances, you can't give an extra ten possessions to Carolina and survive. In the Game Plan, you can see that opponent TO% correlates strongly with UNC's defensive efficiency.