Drexel Offense 06-07Four FactorsPercentNat'l RankeFG%49.6187Turnover Rate21.1164Off Reb Rate32.8196FTM/FGA31.624
There is some good news for our travel-weary team: the Dragons prefer a slower, halfcourt game; they're not going to want to run. They also lack depth--only seven guys average double-digit minutes. Expect all five starters to go 30+ minutes...unless they're beating the crap out of us or something.

Their offense is mediocre; they don't shoot well and they don't offensive rebound well, either, and that's always a bad combination. Drexel averages 101.8 pts/100 poss, which ranks 161st in the nation. Outside shooting has been a problem:
Starters:

Bashir Mason (6-0, 185) -- Third scoring option behind Mejia and Elegar. He has a good defensive reputation and one of the best steal rates in the country.

Scott Rodgers (6-3, 205) -- Scott Rodgers, whose heroes include Ralph Mims, Anthony Harris, and Quentin Thomas, is a possession-waster extraordinaire. He can't shoot and compounds matters by turning the ball over a bunch. He gets 30.6 minutes per game, which he totally deserves. Rebounds? Nah. Assists? Meh. Just what, would you say, you do here, Scott?

Dominick Mejia (6-5, 200) -- By far the Dragons' most frequent three-point shooter, two-thirds of Mejia's field goal attempts this season have been threes. He's one of two players (Elegar being the other) on the team who takes an above average proportion of shots. As long as his underwelming shooting continues, it's to our benefit for him to shoot as often as possible. His 1.00 PPWS is among the lower figures on the team. Go stick it to us, Dom. Pull up from 25; that'd show us!

Frank Elegar (6-9, 220) -- The team's leading scorer and primary option. Elegar uses over 29% of the team's possessions and takes over 29% of the shots while he's on the court. He rebounds well at both ends of the floor, is a decent shot blocker, and does an excellent job getting to the free throw line (averages 9.1 FTA/40 min). He's a bit foul prone, so hopefully McCauley/Costner can get him in trouble.

Chaz Crawford (6-10, 235) -- Not going to be too involved offensively; he rebounds and blocks shots like crazy, though. His OR%, DR%, and block rate all rank in the top 50 nationally. Foul prone like Elegar.

Tramayne Hawthorne (6-0, 175) brings some much-needed efficient scoring to the table. He shoots a team-best 56% from the field.

Randy Oveneke (6-7, 220) brings a pulse to the table, and hey, sometimes that's underrated.

Drexel Defense 06-07Four FactorsPercentNat'l RankeFG%45.220Turnover Rate22.1112Off Reb Rate30.759FTM/FGA36.1158
Drexel's defense ranks 25th nationally in steal percentage. All of their guards--and Mason in particular--are proficient swipers. NC State, meanwhile, is one of the easiest teams to steal the ball from in the country (we rank 260th in opponents' steal percentage).

Opponents' Steal% in conference games only:
We allowed opponents to steal the ball on 12.2% of our possessions in conference play--the worst mark in the league.

If Engin's minutes are limited on Tuesday, it could be a nightmare.

The Predict-O-Meter has the Pack taking a close one, 68-64. But Drexel's home court advantage probably makes up that four point difference, and there's no telling whether or not we're going to come to play. 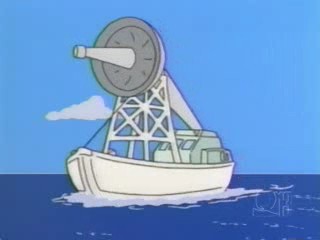 "See that ship over there? They're re-broadcasting Major League Baseball with implied oral consent, not express written consent -- or so the legend goes. They're also sending ESPNU's signal to the twelve people who get it."

[I have to commend these teams for their awesome Simpsons references.]