The KC Star's Jason Whitlock, absolutely on the money:

Bob Huggins is exactly who [KSU President] Wefald and [Athletics Director] Weiser thought he was, a man willing to boldly and deceptively cut corners to get what he wants.

Huggins wants to pursue a college basketball national championship in a town that will let him live hard, coach harder and overlook any ethical shortcoming. He had that for a time at Cincinnati. He found out the Little Apple is just too small to accommodate his social life and too backwoods to legitimately sustain his recruiting appetite, so he bolted for West Virginia, his alma mater that plays in a basketball conference.


In an attempt to limit the damage to its stellar 2007 recruiting class, Kansas State is seriously considering giving the job to either Frank Martin or Dalonte Hill, both of whom were assistants under Huggins in Manhattan. Martin may even be the frontrunner. Hill, of course, was hired by Huggins simply because he was going to bring Michael Beasley with him. I can't imagine Hill is ready for a head coaching gig (he only has a few years of college coaching experience under his belt), but KSU looks more than willing to sacrifice its future for the here and now (not necessarily a bad idea in their case).

They know the game. They were in on it right along with Wefald, Weiser and Huggins. K-State did not replace Jim Wooldridge with a bastion of integrity. The school hired a head coach who hired Frank Martin because he could deliver K-State a couple of stiff big men, Jason Bennett and Luis Colon. The school hired a head coach who hired Dalonte Hill because he could deliver the nation’s No. 1 recruit, Michael Beasley, a kid who was probably planning to stay at K-State for one year.

Hill betrayed Bobby Lutz at Charlotte to get in bed with Huggins at K-State.

This was one giant package deal that exploded. There was never anything ethical or fair about any of it. It was all a scheme to get Beasley, Bill Walker and OJ Mayo to visit campus for one basketball season.

There are no victims here, only men who should be embarrassed. As much as I’d like to give Wefald and Weiser credit for their airing of their honest emotions, my respect is undercut by their unwillingness to immediately cut ties with any and everybody associated with the Huggins’ fiasco.

This is embarrassing. Frank Martin is a nice guy who in no way has the emotional temperament to be a Division I head coach. No way. He’s just too volatile. Dalonte Hill is a 27-year-old kid with a lot of growing up to do before he’s ready to be anyone’s head coach.


Furthering the embarrassment is Weiser's insistence that he will not grant releases to any of the recruits.

Considering the whole heap of unethicality that surrounded the Huggins-to-KSU deal, it's hilarious to read all of the hurt reactions from the K-State side.

"I think it was a very selfish move," said Jon Erskine, a K-State student who stood outside Bramlage Coliseum with a paper bag over his head. "I don't think he thought about anyone but himself." 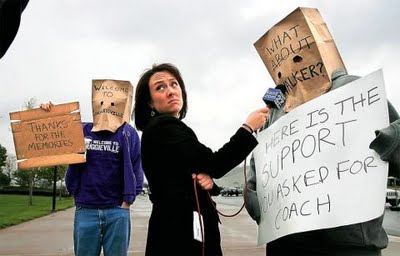 Let me get back to the KSU coaching search, as that's what is relevant to NC State and the potential availability of Beasley/Sutton. Fox Sports reports that if assistant Frank Martin is promoted to head coach, Dalonte Hill will be offered the associate head coaching position.

Which would likely mean Sutton and Beasley honor their commitments to Kansas State:

Sutton -- and Beasley, if the package deal talk is accurate -- and Pullen said if Hill was retained or promoted, it would be helpful in their decisions. Sutton said it meant he and Beasley would honor their commitments, and that would probably influence Pullen's choice.


Update: Some additional tidbits from the Manhattan Mercury:

Sutton, from the Durham (N.C.) Patterson School and a summer AAU teammate of Beasley's, said the only way he's staying at K-State is if Huggins assistant coach Dalonte Hill is retained.

"If they keep him, I'll be there, so will Mikey (Beasley), but only if Dalonte Hill is an assistant coach or the head coach," said Sutton, who, along with Beasley know Hill from his days coaching on the AAU circuit. "That's it, probably the only way."

Sutton, who said he was contacted by N.C. State's Sidney Lowe Thursday, said he would have never even considered K-State had Hill not been here — whether Huggins was at K-State or not.

"I never even heard of K-State basketball, never, before Coach Hill went there," he said. "I was looking at schools like the Carolinas, UConn, and Kansas."
However Sutton's stepfather, Walter Foster, said there is no chance of him following Huggins to West Virginia.


Emphasis mine. Did Lowe commit an NCAA violation? The story continues:

But Sutton, along with Beasley, Pullen, and Fred Brown have binding agreements with K-State after signing national letters of intent. Considering that, whatever contact any of these recruits have with other universities could be violation of NCAA rules.


Update II: It's official: Frank Martin is KSU's new head coach, and Dalonte Hill is the associate head coach. If Sutton is true to his word, both he and Beasley will be sticking with the Wildcats.