Carolina held its awards banquet last night, and both Hansbrough and Lawson took the opportunity to announce they were staying in school. Other highlights:

-- Lawson won the John Lotz Award for having the most assists on the team. Even though he had like 160 fewer assists, I am outraged that Quentin Thomas did not receive this award.

Give QT 26 minutes a night and then we'll see who has the most assists! (And also the most turnovers!) (And maybe the lowest shooting percentage!)

Lawson's decision to return saddens me because it means Thomas probably won't get any additional playing time next season. The Dean Dome is a brighter place with Thomas on the court.

-- Dewey Burke is an inspiration--or at least he has an award that says he is. The N&O describes his award as being "for special contributions," which is fantastically vague. I don't want to sound like a broken record, but: Quentin Thomas. Robbed. You tell me what's more special than 11.5 assists and 5.1 turnovers per 40 minutes. Dewey Burke makes a basket once a month and he gets an award? What kind of crap is that? Here we see Burke receiving his award, which appears to be a steering wheel, or possibly a frisbee: 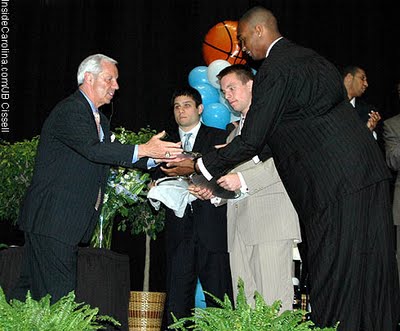 -- If Roy Williams ever wants to one-up Sidney Lowe's red jacket, he has the means to do so: 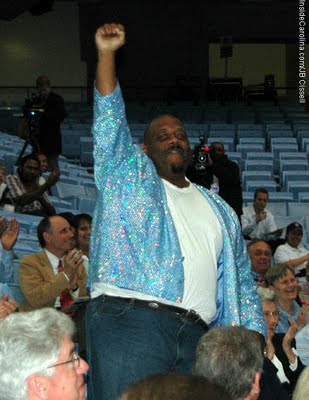 "Coach, you guys really rebounded the ball well tonight. Can you talk about the effort on the glass?"

"Forget that. Let's talk about how sparkly I am."

[Thanks to Inside Carolina for the photos.]