You're this close to being dead to me, Nevada.

Share All sharing options for: You're this close to being dead to me, Nevada.

Does this qualify as backpedaling?

Keith Nichols, N.C. State's director of news and communications of news services, said the issue has gotten out of hand after a student at N.C. State wrote a paper about the similar logos for a class. Nichols said that the student's instructor suggested he publish the work in the student newspaper, The Technician. The student newspaper reported that the director of trademark licensing, Cindy Sears, said there could be "huge infringement" that would require "legal counsel." Sears was unavailable for comment.

The local daily newspaper, The News and Observer, and the Associated Press both wrote stories on it, and Nichols said they made the issue bigger than it is.

"It sort of came into the public eye by accident," Nichols said.

He also said that Nevada's name was mentioned off-handedly and most instances of logo use are handled informally.

"I don't think Cindy's goal was for this to reach where it has," Nichols said.


I can understand him not wanting the big, bad University of Nevada-Reno mad at us. But no matter! We press on.

As the News & Observer reports, North Carolina State University has sent notice to the University of Nevada, but a response had not been received as of June 6.


You hear that, Nevada? You're on notice. 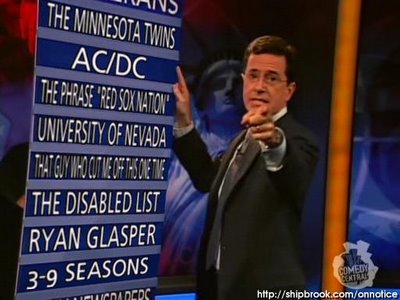 There it is, Nevada. Deal with it.

I actually bought the Nevada hat that has Tuffy on it, but I haven't had an opportunity to wear it around town because somebody stole it shortly after it arrived: I keep asking him, "shouldn't you, I don't know, be setting an example?" He says he just wants to change it up for a while.