Share All sharing options for: The 2007 UCF Offense: "Dude, I feel like we should be scoring more."

Of Puzzle Pieces New And Old

Mike Walker was far and away Central Florida's leading receiver last season, catching 90 balls for 1178 yards and 7 touchdowns. That was 30 more receptions than the team's second- and third-leading receivers had combined. The good news is that those two--Rocky Ross and Javid James--return.

Also back are the Knights' top two tight ends; however, neither was much of a factor in the passing game in 2006. Merritt caught three passes all season.

In the wake of Walker's graduation, then, UCF is left with a modicum of returning experience at receiver and a wealth of possibilities. Ross is the most obvious choice to step into Walker's shoes; James and sophomore Willie Thornton could surprise as well, and you can expect those guys to be lined up with Ross and the first string more often than not. Ross and James are well-equipped physically (6-2 and 6-3, respectively), while Thornton is more your typical slot receiver--great speed but not a lot of size (5-10, 175 lbs).

It's behind those three where the myriad possibilities lie. George O'Leary finds himself with a lot of youth among the 13 players he's working out at receiver during fall practice, and the depth chart remains murky.

Receivers coach David Kelly, who likens the youthful group to newborn "babies," said the potential-filled group has been hard to distinguish.

"With all the babies that I've got, it's all been one blur," he said. "Obviously anytime you're dealing with a group this young there are a lot of things you have to teach. And when I say teach, I'm talking about tying their shoes to tying up their shoulder pads and everything else. There's a challenge in that No. 1, but No. 2, and most importantly, it's exciting.

"It is hard to individualize because one day it is one person, then, the next day they are having a tough day, but someone else is stepping up."

"The thing about this is seeing a team succeed; that's the bottom line," said James, who made four starts and 12 appearances last season. "The likes of Brandon Marshall and Mike Walker are inevitably gonna be a memory and a big part of the building blocks of UCF. However, in the case of finding a reliable and dependable target for Kyle this year, I think it's going to be a more of a core and not a singular player.


The serious questions for the offense, I think, begin and end at receiver. What was one of Conference USA's best offenses in 2006 should find itself near the top again in 2007.

Quarterback Kyle Israel replaced the faltering Steven Moffett halfway through 2006 and has been atop the depth chart ever since; I had been curious if perhaps former NC State quarterback Mike Greco could supplant Israel in practice, but Greco's reps have been limited by an injury. It's been Israel's show and he hasn't done anything to shake the coaching staff's confidence. When he took over last season, he gave the Knights the passing efficiency they'd lacked. Highlights of his 2006 include a 27-42, 327 yard, 3 TD/1 INT performance against Rice and a 19-22, 270 yard, 2 TD/1 INT performance against UAB. As long as the receivers sort themselves out, the Knights' passing game will be fine.

The offense's biggest weapon might be junior running back Kevin Smith.
Throw in his track record with the fact that four of five OL starters return and there are no doubts here. The UCF running game will provide a serious challenge for NC State's green linebacking corps.

One way in which to mitigate the limited experience at receiver is to get Smith more involved in the passing game, and the Central Florida coaching staff is going to do just that:

The Knights are missing just three starters on offense from last year's team, but are playing with a few new wrinkles this fall, including finding other ways to get the ball to junior RB Kevin Smith.

Wrinkles that, among other things, include seeing an increase in Smith catching the ball out of the backfield.


Smith hasn't done much pass-catching in his first two seasons--he has 31 career receptions. Expect him to eclipse that total in 2007.

They didn't have too much trouble moving the football; helping them along the way was a 3rd down conversion percentage that ranked 25th nationally. Thanks to mgoblog's fine research, I can offer a picture of that 3rd down efficiency: 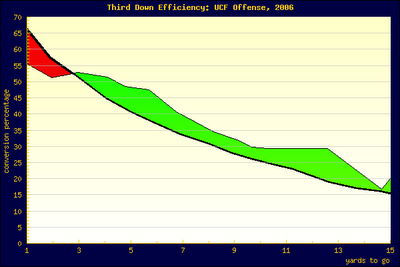 Above average in all situations save short yardage.

But here's where it gets strange:
You wanna talk about getting Mazzoned; if that wasn't the largest discrepancy in yardage/scoring in college football last season, it surely was among the largest.

This appears to be some single-season weirdness, as the 2005 squad saw no such gulf between yards and points (40th in total O, 47th in scoring O). Were turnovers a factor in the slide? In terms of defensive TDs making a difference in scoring, the answer is no--they had none in either year. Offensively speaking, it's hard to say for sure, but last year's offense actually gave the ball away one fewer time than did the 2005 offense.

Let's look at red zone production:
Their scoring percentage dropped in 2006, as did the percentage of their red zone opportunities/scores that were touchdowns. They also, be it because of game situation or because O'Leary felt like rolling the dice, left more points on the table by turning the ball over on downs more often.

Getting back to turnovers for a second: in 2005, UCF's defense had 32 takeaways; in 2006, ... 12. Twelve. I would imagine that translated into a lot of good scoring opportunities/short fields lost. With more ground to cover, they could go 30-40 yards and still end up having to punt.

I suspect that 2006 was a confluence of lower red zone scoring and touchdown percentages, fewer big-play TDs, and less table-setting on the part of the team's porous defense. In general, the Knights had to work harder for points, and while that gave them chances to pile up yardage, it was, not surprisingly, detrimental to their scoring. That's my guess, anyway.

Coming up: a look at the Central Florida defense and special teams.