Coach wants to have a few thousand words with you.

Share All sharing options for: Coach wants to have a few thousand words with you.

Many players began the monologue upright, on one knee and attentive. Many ended the talk with both legs under their thighs and slumped over like kindergarteners uninterested during a boring, pre-naptime story.

"It's a lot different," senior wide receiver Darrell Blackman said. "To sit there and listen to Chuck talk about the things he wanted to talk about, it was kind of redundant because he kept going over the same thing, the same thing, same thing. It felt like people after a while lost focus in meetings."

Blackman said Amato's talks lengthened as the losing mounted and drove away some players. And as time wore on, the team divided. Players went their separate ways, arguments became commonplace and Amato's long-windedness became a metaphor for a program that lacked organization, cohesion, and in the end, direction and victories. 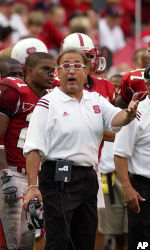 "Amato's talks lengthened," and this is from a 19-minute baseline established early in the year. I wonder how long his Carolina-week spiel was. If they wanted to listen to a 40-minute lecture, coach, they'd have gone to their Bugs & People class that morning.

"Where do you think you're going? Nobody's leaving. Nobody's walking out on this football team. No, no. We're all in this together. This is a full-blown, four-alarm football emergency here. We're gonna press on, and we're gonna have the hap, hap, happiest game since Terrence Holt tap-danced with Wynn fucking Kopp. And when Bunting squeezes his fat white ass into our locker room, he's gonna find the jolliest bunch of assholes this side of the nuthouse."

(With apologies to Christmas Vacation.)