Share All sharing options for: Kenny Drummond's Future Academy: Yeah, It's A Scam

You might remember this post I made back in July highlighting an article in the Greensboro News-Record about Drummond's prep school. The article was plenty damning, but it gets better. Check out the comments.

This whole thing is a scam. My cousin was brought from out of town to be on his team. They lived on their on and had to pay their own bills. He said they only practiced once a day. They had games in a middle school gym and sometimes the teams never showed up. They only travled to 3 or 4 out of town games. They didn't have real uniforms. My cousin went back home after my aunt and uncle went to see him. They couldn't believe what was going on. They never had real classes or text books. He told them lies after lies. My cousin went back home and has not talked to any of the guys back in NC but he said the coach never put them in touch with any college coaches. They got put to shame when they played the famous prep school. He called home wanting to leave. Do your research. It's not hard to see this man took these people's money. From what we heard, he does not talk or know what's really going on with any of the guys. When my cousin came home he told us about how guys were getting upset because they didn't know if they were going to college or not.

I am a family member of a victim of this Con Artist...he not only takes people's money but steals these kids hopes and dreams. I can't believe he is not behind bars. Although he is pretty hard to find do to having no physical address and hopping from rec center to rec center before they found out the real deal.

I am a victim of this Con. Not only did he have a "so called" prep school team but he created a high school team as well for 2006/2007 which promises of that never came to be! Last all of 5 games of which we didn't even have enough players for the games. Never even got the so called uniform that we paid for. I notified Kenny Drummond myself for a refund and of course that would never come to be and couldn't even contact him after that because he conveniently changed his cell phone and address (which wasn't the correct one to begin with) and even took his website down for a while. Now it's back up and he's now soliciting more money.


Drummond, although he clearly does not have time for this shit, hears the criticism. An updated portion of his website states:

Due to a biased and racially motivated article printed in the Greensboro News and Record recently by Rob Daniels and Diane Lamb this website has received a number of comments in our guestbook that are malicious and fictitious.


Sorry, Kenny, I don't think the race card's going to fly in this case. He mentions "negative criticism" on two other site pages. Protesting a little too much, I'd say.

Above that on the main site page, he implores you to purchase a brick for $75 dollars, saying, "we need 10 million bricks to make a difference." Also, you can purchase naming rights to the buildings--buildings which are supposed to be built sometime around 2010. Needless to say, a lot of things are available for purchase/sponsorship. Even the website itself. It's for the children. (What do you get for your $500 dollar site sponsorship? About five visitors a day.)

As for whether Drummond's serious about academics or not, look here, people, books! Books! World books. 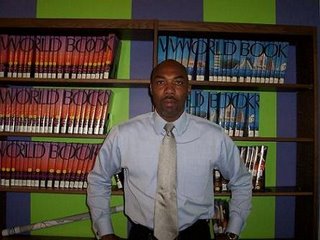 Asked how students could effectively learn from textbooks without the guidance of recognized experts, Drummond said, "I show them how to do the work. I'm a smart guy myself. I showed the guys. ... We talked about the work."


"We talked about the work." Cracks me up every time.