New Orleans Offense 06-07Four FactorsPercentNat'l RankeFG%51.7102Turnover Rate17.011Off Reb Rate29.4288FTM/FGA24.9179
Bo McCalebb is tired. Bo McCalebb could really use some help around here.
(* -- McCalebb broke his thumb early in the fourth game of the '06 season and missed the rest of the year.)

There's high usage, and there's put-the-entire-team-on-your-back high usage. McCalebb's 38.9% usage in 2007 led the nation, while his %Shots figure ranked 2nd. No one's more involved in his team's offfense than this guy, and that's a lot of pressure--pressure that he handled admirably. Of the I-A players with a usage above 28% in 2007, only 22 had a higher offensive rating than McCalebb.

Granted, his production came against a lot of bad mid-majors, but anyone who can maintain a semblance of efficiency with such a ridiculous workload deserves some credit regardless.

Bo McCalebb (6-0, 180) -- McCalebb took more than 500 two-point attempts last season and made nearly half of them, quite a feat for someone his size. If there's a limitation to his game, it's his outside shooting, but he understands this and doesn't take many from beyond the arc. I'm not sure what's more impressive--that he had a turnover rate below 13% or that he had an OR% north of 8%; both numbers are incredible. He averaged 22.4 field goal attempts per 40 minutes last year.

Shaun Reynolds (5-11, 175) -- A good three-point shooter in 2007, but a selective one: he took 59 in nearly 1100 minutes. Like McCalebb, he preferred two-pointers, but had far less success making them. Excellent free throw rate, though, so I would imagine he's pretty fast.

James Parlow (6-3, 170) -- Here's your token three-point specialist. Low-usage, never gets to the line, doesn't turn it over much.

Please do not take the embarrassment personally.

Manning was a starter in 2006 but missed the majority of last season with an injury. Worley transferred from Delaware State after two seasons and sat out 2007. He looks like a decent outside shooter. Tyrna is a freshman from Prague, where an overbearing gymnastics coach pushed him away from his first love and led him to discover basketball. 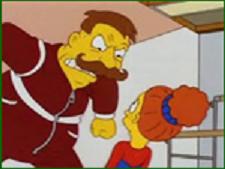 "For next exercise, put hands on
hips, jump out window, and go tell parents
to STOP WASTING TIME WITH FAILURE CHILD!!!"


New Orleans Defense 06-07Four FactorsPercentNat'l RankeFG%52.7278Turnover Rate18.7294Off Reb Rate37.2
308FTA/FGA40.3245
New Orleans had the fifth-worst adjusted defensive efficiency in I-A last year. When your top four minutes-getters are all 6-3 or shorter, as was the case in 2007, defense tends to be an issue. Opponents shot with ease from inside and out, and they grabbed a ton of their own misses.