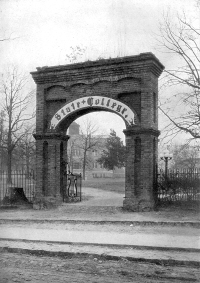 South Carolina State University is, like NC State, a land grant institution, and also used to be referred to as "State College," according to wikipedia. No word as to the brick makeup of SCSU's campus.

The Bulldogs were mauled in predictable fashion by the two major-conference teams they've played in the early going (UNC, South Carolina), but their offensive rebounding held up surprisingly well against both, so they appear to be a decent test, at least in this lone regard.

Jessie Burton (5-11, 170) -- Turns the ball over a bunch and has what I consider to be a modest assist rate for a point guard, though it appears he is sharing those duties with Carrio Bennett. Good shooter from outside, so far (40.6 3FG%).

Carrio Bennett (6-1, 155) -- SCSU's leading scorer and a more well-rounded guard than Burton, but still woefully inefficient. Like Burton, he's been good from behind the arc but terrible inside of it.

Jason Flagler (6-4, 185) -- Listed as a guard/forward, but it's clear his range is limited, as he rarely attempts threes. Good offensive rebounder for his height.

Jason Johnson (6-7, 220) -- Fits right into the team concept in that he turns the ball over too much. (As far as team concepts go, I can't say I'm sold on this one.) But he is shooting the ball reasonably well and has put up solid block and assist rates thus far.

Julius Carter was excellent as a role player in 2007 (a 124.6 ORtg--that sticks out just a tad in this bunch), and he has continued to display good touch from inside this season, but has for whatever reason been buried on the depth chart, his minutes dropping significantly. He is an offensive rebounding machine.

SC State is another in a long line of examples why every rebound needs an adjective.

Ken Pomeroy predicts a 20-point win for the Wolfpack; if we simply box out (there's a first for everything), the margin will be much larger than that.