Let me come over, I can waste your time I'm bored.

Share All sharing options for: Let me come over, I can waste your time I'm bored.

"I'm kind of speechless because I didn't see that coming," said Ben McCauley, who had eight points and four rebounds for N.C. State.

"I thought that we just made some poor decisions," Lowe said. "There is no need for me to come in there yelling."


This is astounding to me. Based on the way we came out in the second half, I assumed he threw some chairs around the locker room. He's right--"some poor decisions" aren't worth yelling about, but that's a rather generous summary of the half. The lack of focus, the pathetic rebounding, the laziness--those things are worth yelling about. We almost literally forgot how to play basketball for more than ten minutes; they scored a few in a row, we folded under the mounting pressure, and everything went to hell. It was appalling.

I'm going to go have a nice discussion with my good friends Mr. Beam and Mr. Daniels right now.


I could use a chat myself. 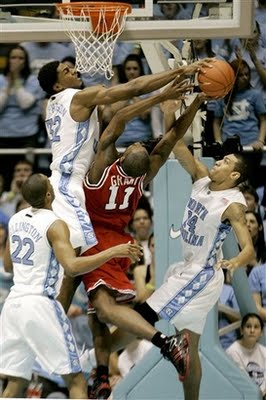