They do tend to enjoy the RBC Center experience.

Share All sharing options for: They do tend to enjoy the RBC Center experience.

-- Pity the poor souls from Mount St. Mary's and Arkansas. Carolina scored 113 points in 75 possessions against MSM and 108 in 67 against the Razorbacks; that's better than 1.5 pts/poss in each game, which is absurd. This is what dominance looks like:

You can't help but marvel at that.

The whole of UNC's success, as always, can be directly attributed to Quentin Thomas, who had 10 assists in 30 minutes of playing time over the course of the weekend. 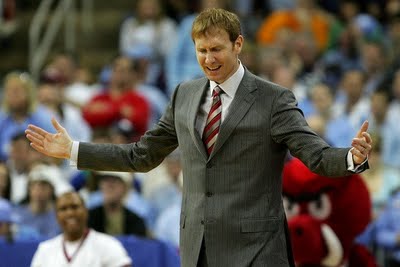 
-- I'm on the Davidson bandwagon from here on out. Georgetown shot better than 75% and still managed to lose thanks to a -15 turnover margin. The Hoyas turned the ball over 20 times in just 61 possessions.

-- I only got 10 of 16 sweet sixteen teams correct, but my elite eight is intact. The only real shocker to me this weekend was UConn's loss at the hands of San Diego, though Clemson's defeat is a close second.